Here at Inland Northwest Business Watch we are planning to build up the commercial real estate side of our Spokane area business news coverage. And, our first step is a periodic round up of the most recent real estate transactions as they are reported to us.

Many are not reported to us, so I invite ALL brokers and agents to start sending your info to matt.behringer@inlandnwbusiness.com or the business email inlandbusiness@yahoo.com, this benefits my readers but also your own publicity.

Compassionate Addiction Treatment has leased 15,486 square feet of office space at 112 E 1st Ave, where it is moving from 215 W. 2nd Ave. Mark McLees of NAI Black, and Stephen Barbieri, of Goodale & Barbieri handled the transaction.

Bob Spooner of Goodale & Barbieri represented the landlord on a lease transaction with Eastern Washington University's Early Head Start Program. The space is located at 101 W. Cataldo Ave. Suite 100B

The Revival recently leased space at 12 W. Pacific in Spokane. Clayton McFarland handled the transaction, The Revival is a Christian Ministry dedicated to serving underprivlaged groups in Downtown Spokane.

Posted by Matthew Behringer at 9:30 PM

Seattle based restaurateur Ethan Stowell has announced today that he plans to open a location of his Tavolata restaurant, a popular modern Italian eatery, in Spokane. Stowell says " When the opportunity arose for us to cross the mountains and create an amazing restaurant in such an amazing place, we jumped at it "

Tavolata will be the anchor tenant of the historic and recently renovated OCH Building at the corner of N. Wall St and Spokane Falls Blvd. in Downtown Spokane. The restaurant will occupy a 5,000 square foot space that had been vacant but was at one time an Olive Garden restaurant. Tenant improvements are underway and the new Tavolata is set to open in early 2021.

Chris Bell along with Jon Jefferies of NAI Black represented the landlord in the transaction. They also acknowledge they have multiple deals at the OCH Building that they plan to announce in the coming weeks. " Now that the building has been fully renovated and updated we are seeing an increase in lease activity " said Jon Jefferies.

The new restaurant will have a prime location across from Riverfront Park and the Numerica Skate Ribbon. It will feature seating for 172 guests between the main dining room, lounge area, bar counter and bar. As well as offering two private dining rooms and a seasonal patio with a additional seating for 30.

Additionally, but not mentioned in today's announcement is a place called " Tavolata Mini " which recently popped up on a permit for a tenant improvement at the Wonder Building, a few blocks north of this site. We're keeping an eye out for news on that.

Posted by Matthew Behringer at 12:55 PM

New buildings going up in the Kendall Yards Business District

West of Jefferson rendering courtesy of Baker Construction & Development, Inc.
New development is getting underway in the Kendall Yards Business District, along W. Summit Pkwy and north of Downtown Spokane. Two new mixed use buildings are planned along the north side of Summit in-between the My Fresh Basket grocery store and the existing buildings of Kendall Yards.

Baker Construction & Development, Inc. of Spokane will be the general contractor for both buildings, the first of which is currently being called West of Jefferson and would be directly next to the existing business district buildings. This building will be a five story structure with commercial on the ground floor and apartments on the upper floors.

The plans for the West of Jefferson building call for four retail spaces, a restaurant space on the lower level and a total of 41 apartments above. The residential space will be made up of eight studios, thirteen one-bedroom and twenty two-bedroom units with a completion date for the entire building being planned by the end of 2021.

Just east of this new building will soon be another new building. This will be a unique looking " Flatiron " style building, construction will start later and given this there is not a completion date just yet for the Flatiron building. However once constructed it will offer ground floor retail space and 8 units of residential above, each of the residential units will have a loft mezzanine.

Posted by Matthew Behringer at 8:13 PM

Extensive renovations wrap up for a hotel on the Division St. Hill 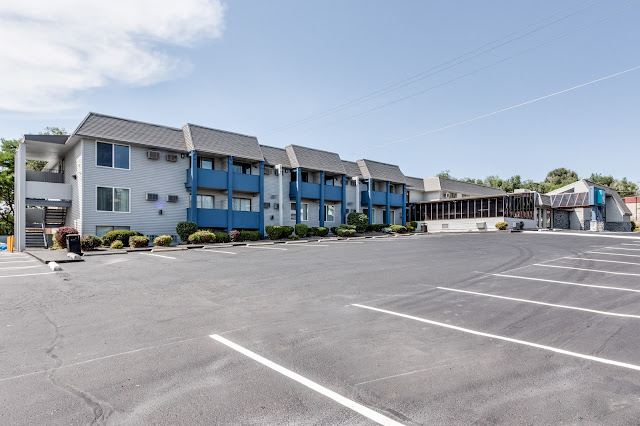 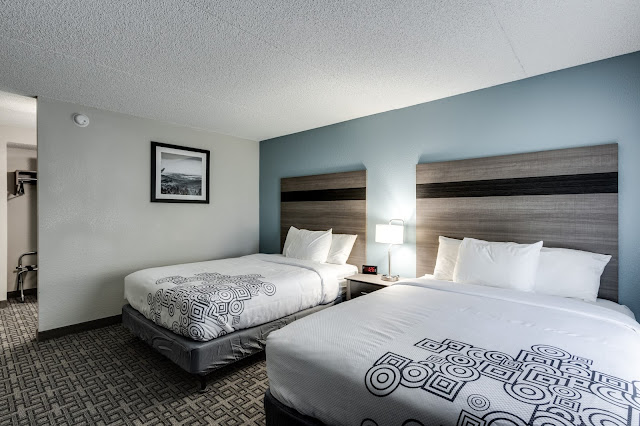 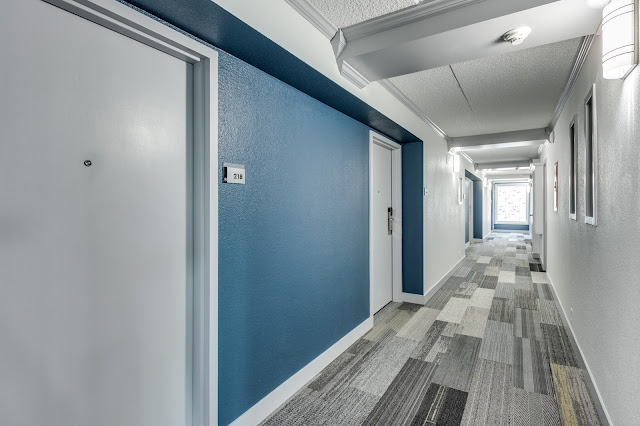 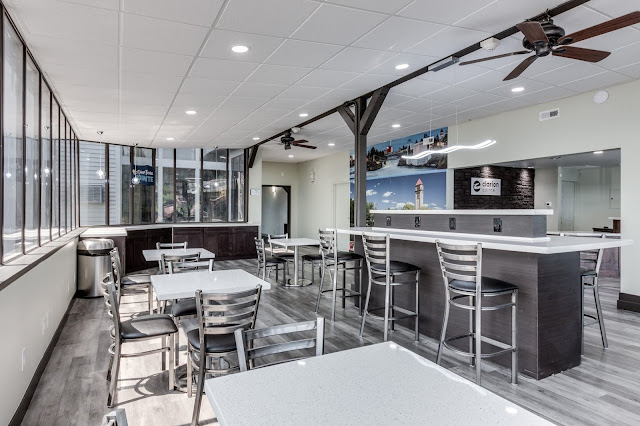 A fresh new look is in place after an extensive renovation of a highly visible hotel at the base of the Division Street Hill. The hotel, which is located at 3033 N. Division St, originally opened as a Best Western but has aligned with budget brands most recently.

The current owner, Sapphire Hospitality, acquired the hotel in 2008. All together they own several other properties around the Pacific NW and boast about 500 total rooms now in their portfolio. This hotel in Spokane offers 61 rooms on three floors.

The renovations are wrapping up and the hotel will end up being re-branded with Days Inn & Suites by Wyndham and it is clean modern lodging option nearby Downtown, the University District and much of Spokane. The hotel now offers a fitness center, business center, guest laundry, indoor pool, hot breakfast, a market place and 50" TV's in each room.

For more info and to place room reservations for the new Days Inn & Suites By Wyndham Spokane, visit the hotels page on http://www.wyndhamhotels.com 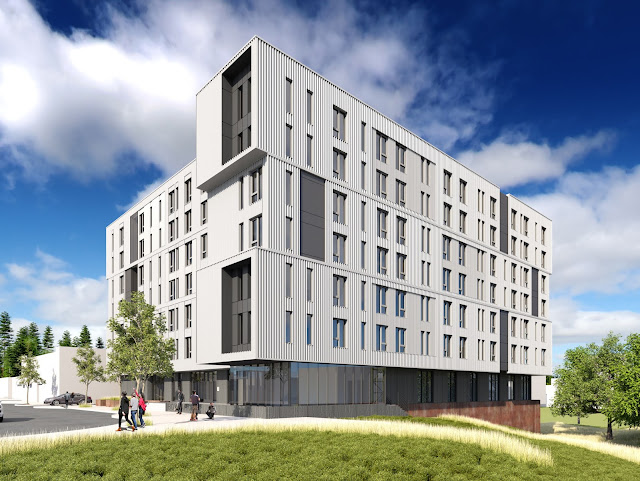 Renderings are provided courtesy of Project^ , thank you.

Construction is set to begin as soon as early October for a new seven story apartment building coming east of Downtown Spokane in the University District neighborhood. The large building will rise on a vacant lot located at 15 N. Grant, just a short distance west of the new University Gateway Bridge's south landing.

Plans call for a mixed use building that will be primarily residential with 136 units consisting of studios , one and two bedroom apartments. The project will offer a lobby, fitness room, sauna, outdoor deck, dog wash, secured bike room, garden and package concierge. Covered parking and a café space will also be included and they are targeting to achieve LEED Silver status.

The Boxcar Apartment project is being developed by Project^ , a Portland based developer who has an impressive portfolio of projects in Oregon and California, this will be the companies first development in the Spokane market. TVA Architects of Portland designed the project and Spokane based Bouten Construction will be the general contractor with the development set to be complete in 2021.

Posted by Matthew Behringer at 8:40 PM

After 4 plus years of planning and selling, construction is now well underway for Haystack Heights Cohousing, which will be the first cohousing development to be built in Spokane. 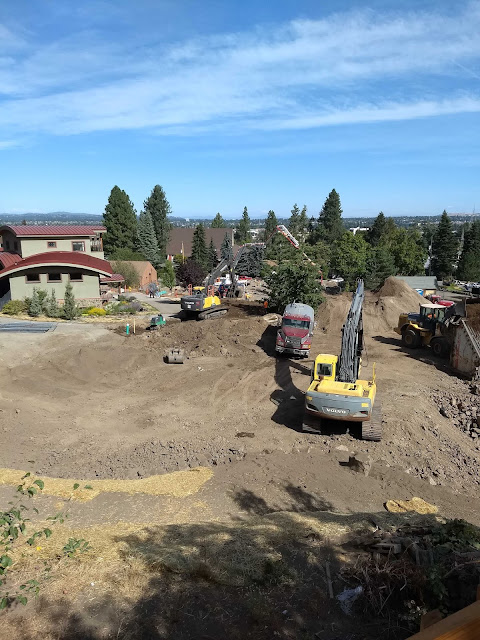 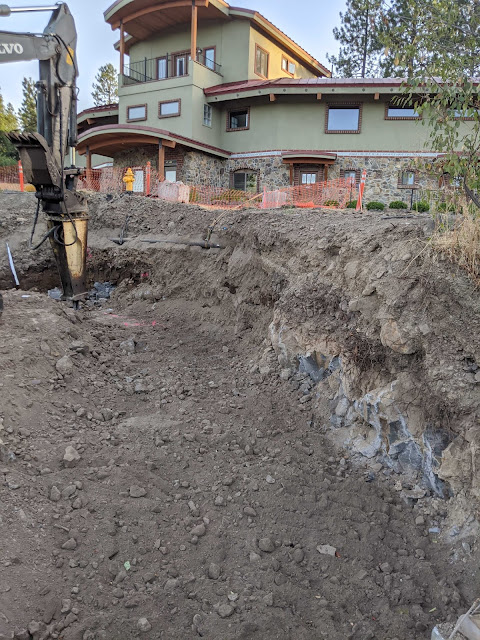 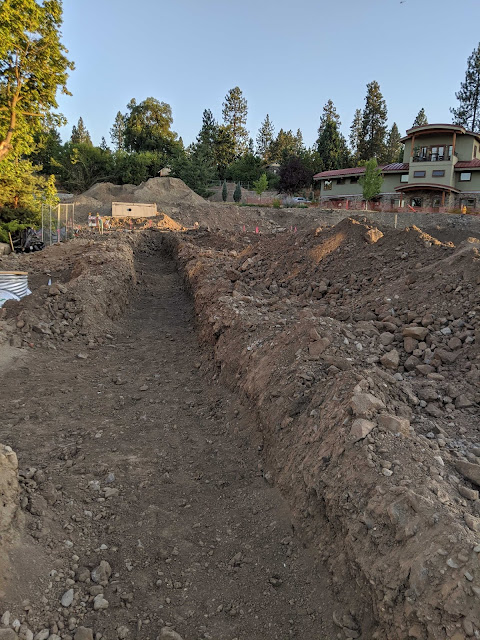 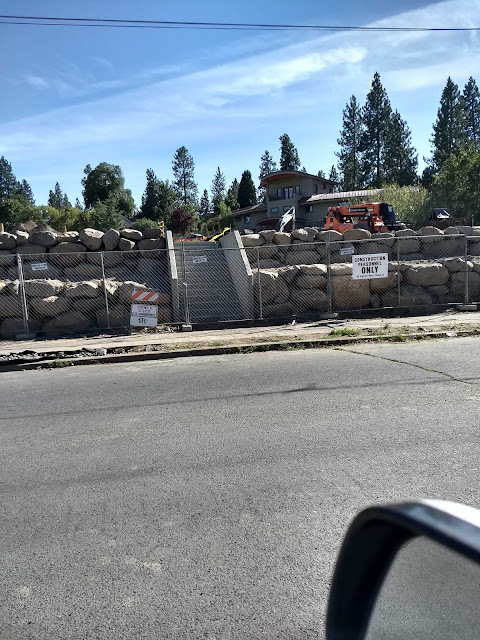 Cohousing is a form of neighborhood development that has grown over the past 30 years and now with over 165 communities nationwide. In the concept residents reside in their own private living spaces but share a common centrally located club house for shared meals and activities.

The project here in Spokane is being developed by The Perry Group,LLC with 32 private townhomes and flats plus 7 existing units in buildings that are already at the site. The project sits on three acres of land just southeast of the corner of Hartson Ave and Garfield St, in the South Perry Neighborhood. Homes range from 650 square foot single level flats to 1470 square foot two story townhomes. All homes had been reserved by future resident members by Valentine's of the year before construction began and now the community maintains a waiting list of potential buyers.

The common house construction will begin soon with 3,200 square feet of space that will include a kitchen, lounge, laundry, 2 guest rooms, a kid's playroom, a bike garage and gardens. Construction on the entire project is to be complete during the winter of 2021 with construction financed by Numerica Credit Union and work being done by Yost Gallager Construction,LLC of Spokane.

For more information on Haystack Heights Cohousing, visit their website at http://www.spokanecohousing.com

Posted by Matthew Behringer at 9:08 PM

Please join us is saying Aloha to one of Spokane's newest restaurants, Hang 10 Hawaiian BBQ. You'll find this new restaurant opening in the space next door to Press Public House at 909 S. Grand. It is also owned by the Goodwin Group which has a stake in Press and a number of popular bars & restaurants all around Spokane. 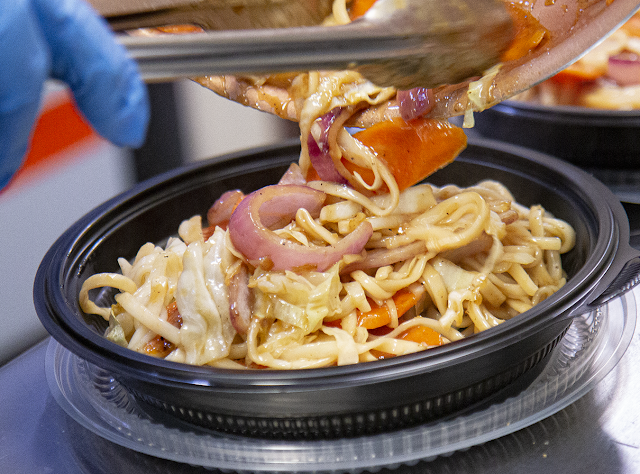 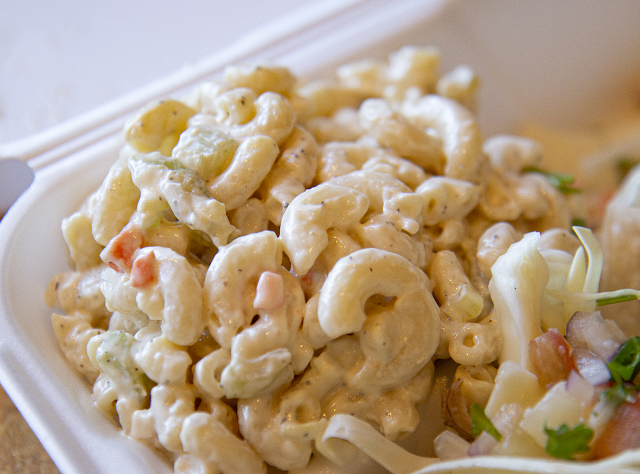 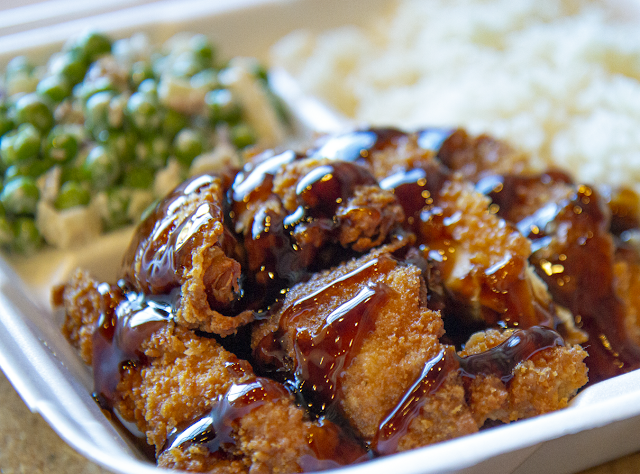 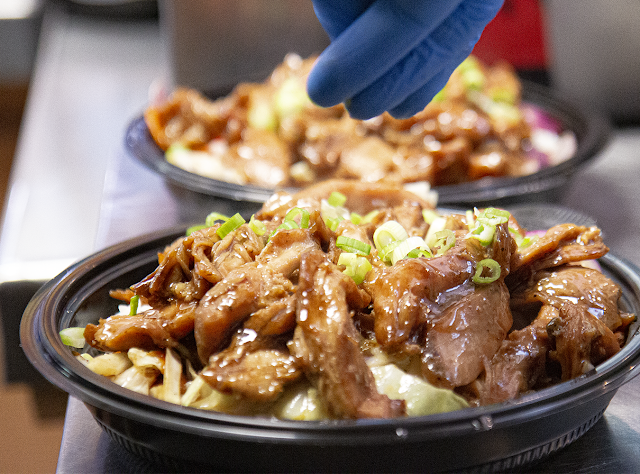 Hang 10 is currently in soft opening as of my writing this and serving their menu out of Press only, although they plan to open in the new space next door within the next few days. They say the restaurant is a quick serve style eatery, making as much as possible from scratch, with sous vide meats, house made sauces and fresh grilled meats and veggies.

Hang 10 BBQ describes their menu as authentic Hawaiian BBQ. They offer plate lunches, burgers, sandwiches and entrees like Loco Moco and Kalua Pork Tacos. They are open daily from 11a-9p and offer vegan, vegetarian, and gluten free options in addition to some catering. For more information find them on Facebook or Instagram.

Posted by Matthew Behringer at 8:03 PM