The revitalization of Downtown Spokane's western edge is pushing forward with W. 1st Ave. being it's main drag. In recent months we've seen the openings of new restaurants like Watts 1903, a new brewery called Brick West Brewing Co, a hip urban mid rise apartment building,  a pleasant urban park a few new shops and more. But it's not stopping there as more places are coming in the next few months with Method Juice / Union Yoga , Hotel Indigo and a new called restaurant Magnolia American all still under construction.

And, there is even more being re-development being announced as we're now learning about a new mixed use renovation project at 111 S. Adams, the historic brick building at the southeast side of the W. First / S. Adams intersection. 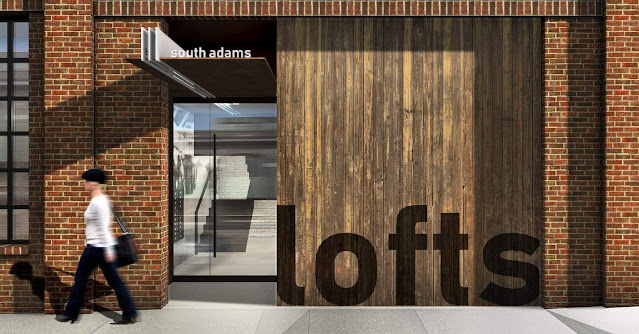 Plans call for the structure to be fully renovated and turned in a new development called Lolo Lofts. The ground floor will be updated but will remain as commercial space, 6500 square feet in all. The upper floor will be converted to a residential use with 10 hip looking loft units that will be made available for renters on Airbnb.

We have confirmed that this project will be moving forward with construction possibly beginning as soon as August and completion in the Spring of 2021. Trek Architecture of Spokane is in charge of the architectural design and stay tuned as we plan to continue watching this project as it progresses.
Posted by Matthew Behringer at 4:09 PM

Amazon begins hiring for new Spokane Fulfillment Center ( plus how to apply... )

We've been patiently watching the construction of Amazon's new Spokane Fulfillment Center for months now. The massive 2.5 million square foot structure located at 10010 W. Geiger Blvd, just off of I-90 is hard to miss and it's promise of new jobs in a time of business closures and layoffs is good news for our area. 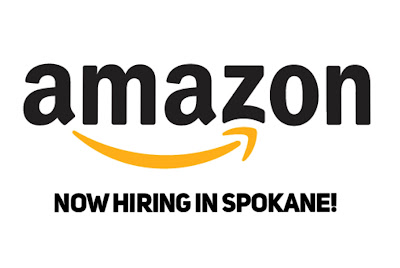 And, there is good news because beginning today, interested parties can start to apply for warehouse team member positions at the new Spokane center. It's estimated that the new Amazon Spokane Fulfillment Center will employ upwards of 2000 with jobs that the following benefits-

Individuals can beginning applying now, but the distribution center itself won't open for a little bit longer. An opening date hasn't been given just yet but as per previous press releases it is expected to begin operating sometime in " Mid 2020 ".

To apply for jobs at the new Amazon Spokane Fulfillment Center

Follow to prompts to apply online for the job, then schedule a time to attend a hiring event and orientation. However please do take note that they do request candidates to stay home if any of the following applies to them-

Posted by Matthew Behringer at 3:31 PM

Uncle Rusty's Diner is coming soon to Spokane Valley. The locally owned and operated restaurant will open at 18723 E. Cataldo Suite A, off of Barker Rd and nearby I-90. The space has been a number of small restaurants in recent years.

The new restaurant could open as soon as next month, although they are still working on the location and have not announced an opening date as of yet. This will be a second location for Uncle Rusty's Diner as they already operate a diner in Downtown Spokane at 1412 W. Second
Uncle Rusty's Diner describes themselves as a " family owned American style diner serving home style breakfast, lunch and early dinner ". The location in the Valley will be similar to their current location but will stay open later and feature a larger dinner menu then the Downtown location. Additionally the beer and wine selection will be larger at the Valley location, and they will be able to feature beers on tap, while still being a family friendly establishment.

For more info on Uncle Rusty's Diner, including their menu and online ordering service, visit their website at http://unclerustysdiner.com
Posted by Matthew Behringer at 5:42 PM

Poke and even poke burritos are coming to Coeur d' Alene on June 5th, just a few weeks from now. Despite having their business opening placed on pause , a new locally owned franchise of the Pokeworks chain is now almost ready to welcome diners. 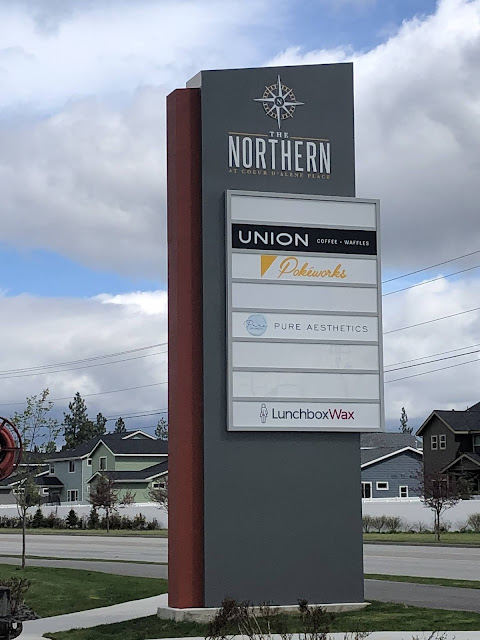 Started in 2015 this California based company has been growing and adding new franchised locations quickly. The restaurants are quick service style establishments with a menu inspired in part by chef-collaborator Sheldon Simeon, who is alumnus of Bravo's Top Chef. Pokeworks offers what they call " Poke Your Way " . Several " signature works " poke bowls are also available, but customers can also create their own by choosing a base, protein, mix … all done fast and fresh.

The new Coeur d' Alene Pokeworks location will be within a newly constructed strip mall that was built as part " The Northern at Coeur d' Alene Place " development off of Ramsey Rd on the cities northeast side. The restaurant will employ about 20 +/- and it's address is 2007 N. Tea Olive Ln, Suite 100 .

For more info on Pokeworks, including a look at their menu, check out their website at - http://pokeworks.com

Like the rest of the country, small businesses in our area finding it hard to survive as a result of the Covid-19 closures and lock down. I don't want to do this post but for information sake I feel it's time to do a round up of the few businesses that have announced they will not be re-opening in our area....
Prospectors Bar & Grill
12611 N. Division, Spokane
Prospectors has been a long running family owned business that is closing largely due to the lack of business during the closure.
Tomato Street River Park Square
808 W. Main, Spokane
The Tomato Street location inside River Park Square will not re-open. This is one of 3 locations of the restaurant and the newest as it had just opened in 2016. The owners say this closure will allow them focus on the other locations which will remain open.
Rocky Rococo Pizza and Pasta
520 W. Main, Spokane
This was the first closure to be announced but one of the harder hitting as Rocky Rococo had been open in Downtown Spokane for over 35 years. Although the restaurant was actually part of chain it was locally owned and the only location in this region.
Lenny's American & Italian Cuisine
1204 1st St. Cheney
Despite attempting to stay afloat with take out orders the business has announced they will are not closed for good. They we're a local business that was part of the Cheney community for over 20 years.
Party Palace
2607 N. Division, Spokane
Although the current events have hit our restaurants particularly hard, other sectors haven't been spared. The retail party store Party Palace has announced they will re-open the store only to liquidate and close their doors. Party Palace has been a locally owned and operated store in Spokane for 33 years.
But, there is hope...
When 2020 started I never thought I'd be writing a post like this, it's not meant to be political just telling you what we are hearing and perhaps inspire our readers to continue to support our local businesses. Untold numbers of shops and restaurants could still be added to this list before this is all over, and we don't even really know when it will be all over.
But, it's not all sad. Rumors surfaced recently on social media that Satellite Diner & Lounge in Downtown Spokane might soon close too. But, they we're quick to debunk those rumors and today they are very much still open and still as awesome as ever.
I'm also uplifted by a phrase that was said by Lee Gibbon, the franchisee of Rocky Rococo Pizza in a Spokesman Review article about their closure. He said "It's now time to step away and allow a new generation of entrepreneurs to use their energy and talent to create the next success story within the Spokane community "
This too shall pass and we have some incredibly talented business people coming up in the Spokane area. In due time many of these places will be filled with new places where future generations will enjoy just as much as we did. I'm a history buff so of course I'm sad to see these places go but we will be back!
Posted by Matthew Behringer at 7:27 PM

A new restaurant is coming to Downtown Spokane serving up delicious Southern comfort food. But, likely only for a limited time due to this being a "pop-up" restaurant.

The new place is called Caroline's Southern Kitchen and it will open on Thurs. May 7th on the main floor of the Montvale Event Center at 1019 W. 1st in Downtown Spokane. We inquired about how long Caroline's will be open and we're only told they hope to be around for " a long time ", so this new restaurant will likely play off of how successful it is.

Due to the current situation the restaurant will be pick up with no indoor dining. But, the menu sounds awesome and is geared toward feeding a family ( although single servings are also available ). Among the offerings are fried chicken to southern style gumbo to brisket chili and a whole lot more. There is even dirty rice and mac & cheese on the list of sides, this is going to be amazing!

A website for Caroline's Southern Kitchen is coming soon at http://carolineskitchenspokane.com and a new Facebook site is up now at https://www.facebook.com/Carolines-Southern-Kitchen-109958017366580/
Posted by Matthew Behringer at 6:09 PM