Runners Soul closing down both stores

Runners Soul, a well known name in the local fitness scene has announced they will be closing both of their stores. They have been locally owned and operated for over 20 years and their stores are located Downtown on N Wall by River Park Square and off of Division in Wandermere.

The owner spoke with KXLY ( who I’m not affiliated with ) saying the closure is a following a few factors, including the recent changes and construction in their Downtown neighborhood. The Downtown store will close first, followed by the Wandermere store.

For more check out KXLY’s story at-
https://www.kxly.com/news/spokane-s-runners-soul-stores-to-close/1073634156?utm_medium=social&utm_source=facebook_KXLY_4_News
Posted by Matthew Behringer at 7:30 PM

Another potentially huge employer is coming to the West Plains! Brea,CA based Mullen Technologies, Inc. has signed a letter of intent with the West Plains - Airport Area Public Development Authority to develop a massive new plant near Airway Heights.

Mullen Technologies, Inc. intends to use the new Spokane facility to manufacture their Qiantu K50 super-EV electric sports car. The company will ramp up employment in phases, but they hope to employ about 860 people locally by 2026. While 2026 is a few years away however, Mullen is working the PDA already to locate a 100,000 +/- square foot facility to begin production on the West Plains as early as this year. Initially they will employ 55.

That facility will be temporary however, as Mullen will lease a huge new building from the West Plains - Airport Area PDA. No exact address was given but it is explained as about 1 mile SW of the new Exotic Metals Forming,Inc. plant on McFarlane Rd. This would actually place the new facility relatively close to the currently under construction Amazon Fulfillment Center.

The new facility for Mullen Technologies,Inc. will be built in 2 phases, phase one would be 500,000 square feet and complete by about this time in 2021. A second phase of 800,000 square feet would follow and likely house the company's next gen lithium battery research and development, which may mean even more new jobs.

The Qiantu K50, which the company will make here was introduced just last week at the New York International Auto Show. The sleek all electric sports car will have an expected $125,000 median price, a look at the car itself can be found at http://www.motortrend.com/news/2020-qiantu-k50-by-mullen-california-built-bargain-ev-supercar/ ( although the article says the car will be built in California, which is no longer accurate)

This is a developing story which we continue to watch...

Posted by Matthew Behringer at 10:58 AM

New renderings are out for The Falls Tower project

Spokane is really growing up! Quite literally....

Via the Spokane subreddit we've uncovered this exciting new rendering of The Falls project in the North Bank area just north of Downtown Spokane. Currently the developer LB Stone Properties has demolished the former YWCA building to make way for the construction of the first tower. You'll notice the project now includes a 3rd tower which was mentioned in a recent article in the Journal of Business ( https://www.spokanejournal.com/local-news/third-tower-envisioned-for-the-falls-project/ ) 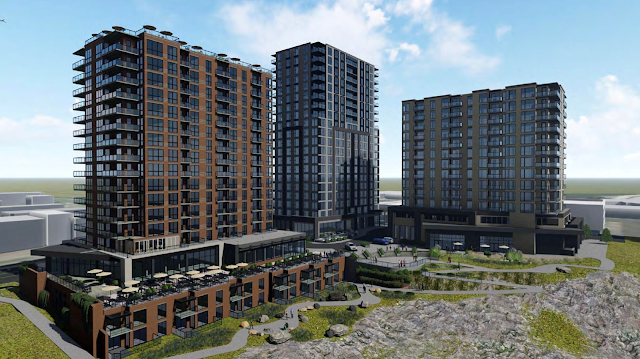 
All with and parking facility to be build on 3 floors underground. Obviously with a project of this scale it'll take some time so we won't even speculate about what will open when. But, if built out as we see today this will be a game changer for the North Bank.
Posted by Matthew Behringer at 7:50 AM

At Home is now open in North Spokane

It's official,  Home Décor superstore At Home is now open in the former Costco building at 6902 N. Division. The new Spokane At Home location is the second store in the state and their 191st store opening nationwide. 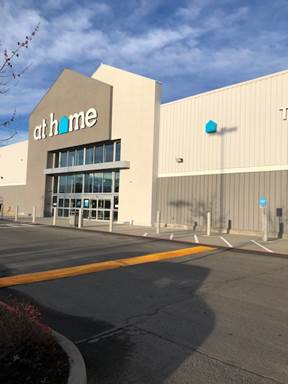 The new store has 88,000 square feet and offers more then 50,000 home décor items, from furniture, mirrors, rugs, art and housewares to tabletop, patio and seasonal décor across a variety of styles. Shoppers will find style ideas through out the store which is based on a warehouse model with continually updating items that showcase the latest trends and seasonal products.

"At Home strives to have the widest selection of home décor items, and we are dedicated to inspiring you to refresh, play and experiment with home décor that reflects your unique personality and style,” said Spokane At Home Store Director Matt Fortner. "We welcome everyone to come in, explore our newest store and find endless decorating possibilities for every room in your home for your budget.” 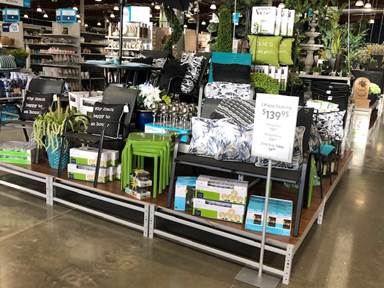 While the store is now open, a new store open house will be held on Sat. May 4th  starting at 9am . The open house will feature gift card giveaways for the first 50 people who visit the store and sign up for their At Home Insider Perks program.

Also, this Summer watch for a second store coming to our area as At Home will also be opening in the former K Mart store building in Coeur d' Alene. For more info on At Home stores visit their website at - http://athome.com
Posted by Matthew Behringer at 12:41 PM

In 2014 the former Bickett Hotel building at 225 W. Riverside in Downtown Spokane underwent a stunning restoration. The building's owner, Jed Conklin renovated the building's upper 2 floors into 8 new apartments that today are very in demand.

At the same time the ground floor also received some updates but has sat vacant and for lease for since then. That is until now as three exciting new businesses are in the works, we'll hopefully have individual posts about each in the near future, but here is an overview of what we know...

Eyvind is a project of Chef Tony Brown, who also owns Ruins, a small and ever changing restaurant on North Monroe. The unique name is a nod to Mr. Eyvind Earles who was an artist known in part for his background illustrations in 1950's era Disney films. He is best known for his background and styling in the 1951 classic Sleeping Beauty.

In a previous interview, Brown described his plan for Eyvind to be a more polished version of Ruins. It will likely be very vegetable forward seasonal local ingredients .

Another project that Chef Tony Brown is involved with will actually be in the basement of The Bickett building. That new restaurant will be called Hunt and will be a small space serving what is being called elevated campfire food.

Redband is a project of the building's owner Jed Conklin. A bit different from the other 2 new places, Redband won't be an everyday restaurant, but instead gathering space. The new space will offer a dining set up and full bar and will be available to rent for gatherings of up 60 guests.


Posted by Matthew Behringer at 2:43 PM

This is due to the planned opening of Tarascon Empanadas at 9222 N. Newport Hwy in North Spokane. The new restaurant will be a quick service eatery in space that is shared with the exsisting Mr. Wok Chinese restaurant.

Tarascon Empanadas will be a locally owned and operated establishment being opened by members of the Alvarez family who came to the US from Argentina in 2002 and became US citizens here in Spokane in 2014. They say they have been making empanadas for years and have always had friends and neighbors are always very interested in trying them. And, soon all of Spokane will be able to...

Empanadas are savory pastries fill with variety of meat and vegetable fillings. According the their newly launched website they will offer pork, spinach, beef, ham and cheese, chicken and maybe more.

To help launch the restaurant Tarascon Empanada's owners have launched a fund raising page on Kickstarter that already as of my writing this is over 2/3 of the way funded and about 2 weeks left to go. More info about their Kickstarter is at- http://kck.st/2Cq43Q5

And for more info on the new restaurant itself, check out their website at https://tarasconempanadas.com/

Or, find them on Facebook at http://www.facebook.com/tarasconempanadas
Posted by Matthew Behringer at 2:13 PM

The owners of Ferrante's Marketplace Café on the South Hill are cooking something up for the Garland District. Soon they will open a new Barbecue restaurant at 713 W. Garland, which had been a small bakery up until recently.

The new restaurant will go by the name Honey Pig BBQ and is currently scheduled to open in May. Honey Pig BBQ will be a seasonal establishment with BBQ dishes. They say the menu will be simple and delicious with meats and sides. They will also sell meat by the pound and customers will be able to dine in or take out their meals.

Honey Pig BBQ will only be open for business on Fridays and Saturdays and will be open until the BBQ sells out. And, following over from Ferrante's this new restaurant will also have gelato!

Watch here and our social media for more on this new restaurant.

Posted by Matthew Behringer at 3:06 PM

The Wake Up Call, a popular and growing Spokane based coffee business is breaking into the North Idaho coffee shop market. 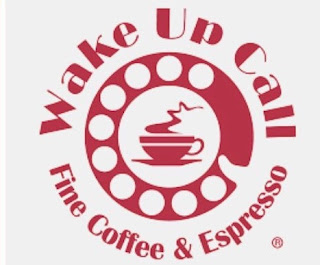 Commercial real estate brokers, SVN Cornerstone, have announced they sold the former Taco Time restaurant building at 2517 N 4th St to the Wake Up Call. Some work has already begun as the building will be remodeled. No opening date has been offered as of this time.

For more info on Wake Up Call Coffee, visit http://wakeupcoffee.biz
Posted by Matthew Behringer at 7:10 PM

While the store’s grand opening is still scheduled for Thursday April 11th , the new Duluth Trading Company store in Spokane Valley is now open in “soft opening” mode. This is the first store for the company in Washington and the 50th overall. 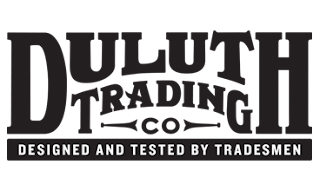 Located at 16314 E Indiana Ave. , the store sells all of the products of the Duluth Trading Company brand of workwear. In all the store is about 15600 square feet and employs approximately 40. The store is open Mon-Sat 9-8 and Sunday 11-5.