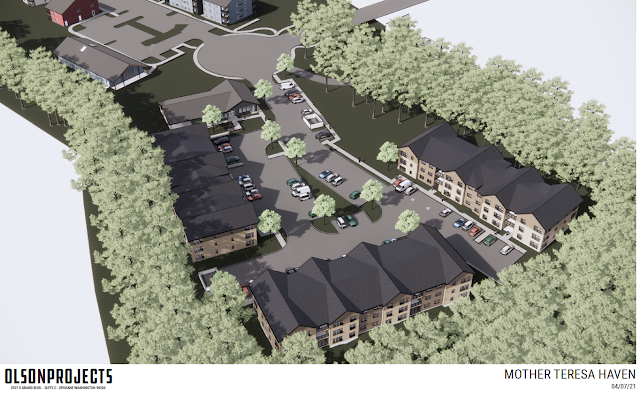 Rendering of the planned Mother Theresa Haven project as provided by Catholic Charities.

The monthly rent for families will average $245 and residents will have access to on-site services including counseling, case management, healthcare, recreational activities and more. The project is funded by an allocation of 9% tax credits and through a loan from Catholic Housing Services Eastern Washington. The project is planned to open sometime in 2022.

At the same time Catholic Charities announced the Mother Theresa Haven project, they also announced a project in the Tri-Cities called Pasco Haven. That development will create 60 units for vulnerable adults in that area.

Additionally, construction is already underway for Gonzaga Family Haven, a 72 unit affordable housing in Spokane off of N. Nevada near Gonzaga Prep. . Catholic Charites says families will be able to move into the units at Gonzaga Family Haven before the start of the 2021 school year.

With the addition of these new developments, this means Catholics Charites will have developed 13 new affordable housing projects since 2012. All of these building projects are fully funded through the IRS, tax credits and the State of Washington. The point out they do raise any private money or solicit donations for these properties.

The E-Commerce giant Amazon continues to invest in the Inland Northwest with more new facilities in our area. Amazon already operates a fulfillment center at 10010 W. Geiger Rd, nicknamed "GEG1", which is reported to employ over 2000 workers.

On the other side of the Spokane area the company is also actively constructing a brand new "non-sort" fulfillment center at 18007 E. Garland, just northeast of the Spokane Business & Industrial Park in Spokane Valley. That center will be nicknamed GEG2 and will also employ large numbers.

But, Amazon is planning even more developments locally, bringing most of their operations and jobs here to the West Plains communities. Here is what we will be seeing the company building in the near future... 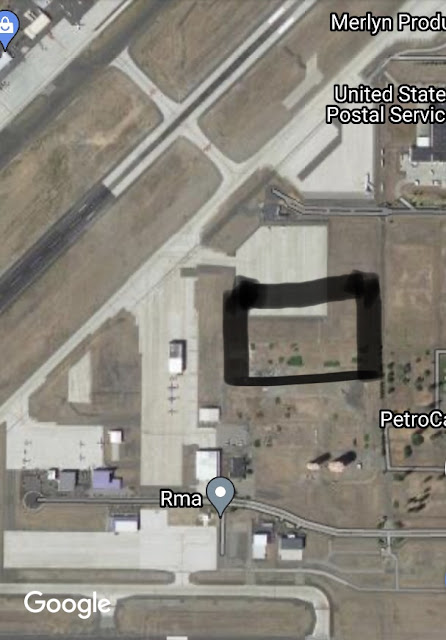 Amazon's growing cargo airline, Amazon Air, will lease a building that will be developed soon by S3R3 Solutions, formerly known as the West Plains PDA. The new building will be built just south of the Airport's runways on a newly constructed road named Airlift Ln.

The new building will be a 30,750 square foot warehouse with 10 truck docks, which will be used to transfer freight to and from aircraft in the Amazon Air system. This new facility is planned to be operational by the end of the year. 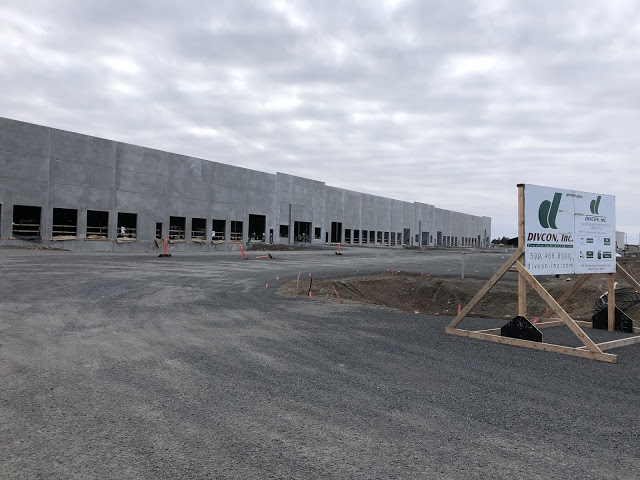 The building that is planned to become the new Amazon Delivery Station, photo by INBW back in Feb.

For a time Amazon had planned to remodel the former Lowe's store on N. Division for what the company calls a " delivery station ". But, the company backed out of that project a few weeks ago, citing difficulties with the permitting process in the City of Spokane.

But, they plan to open a delivery station in the Spokane market after all with the recent announcement that the company will open that new facility in a currently under construction warehouse at 11901 W. McFarlane Rd in Airway Heights and they hope to be operational at the site sometime in the fall.

Delivery stations serve Amazon's "last mile" delivery needs with a host of delivery vans based at these facilities and hundreds of new jobs, all starting at Amazon's $15 an hour minimum wage. The Airway Heights Delivery Station will be one of 250+ delivery stations and will occupy about 180,000 square feet of space.

Amazon also recently opened a small delivery station and Amazon Hub locker operation at the Playfair Commerce Park in the City of Spokane.

We will continue to watch all of these developments and what it'll mean for improved Amazon services in the Inland Northwest, so stay tuned!

Looking for something new to do? Then you might want check out Chaos, a new business in North Spokane that offers a large arcade, VR experience and cafe  and is now open at 1020 W. Francis suite H. 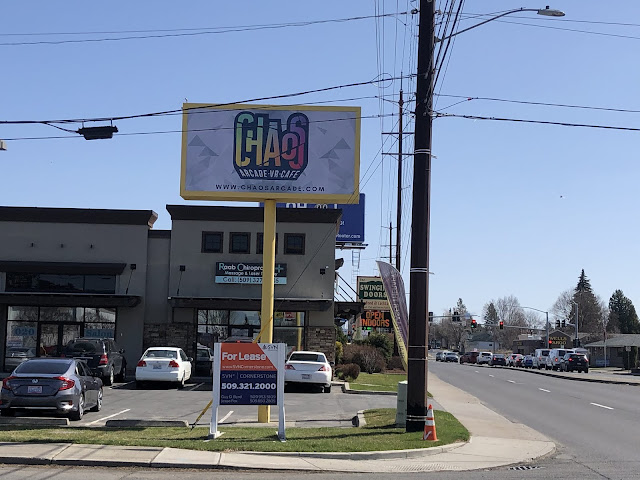 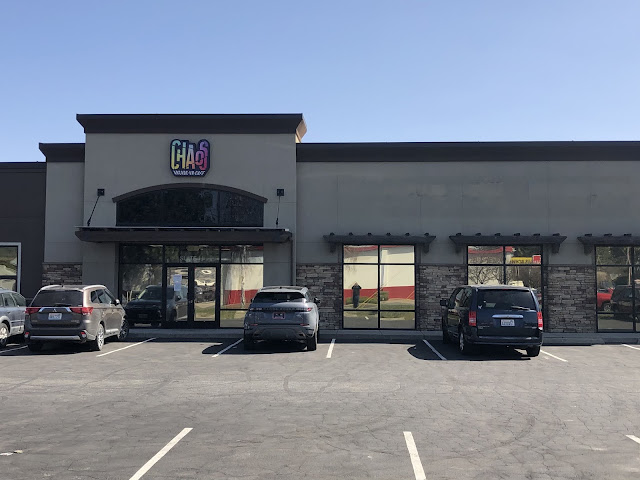 The business' opening was delayed somewhat because of the pandemic, but they are now ready and operational, albeit following current state regulations. Chaos Arcade is located in a 13,000 square foot space with dozens of video games from the most current state of the art games to a few old school classics. Like other arcades, there is even a ticket redemption center stocked up with some great prizes. Money is loaded onto game cards when entering for however much you desire to play and the business is open to all ages. 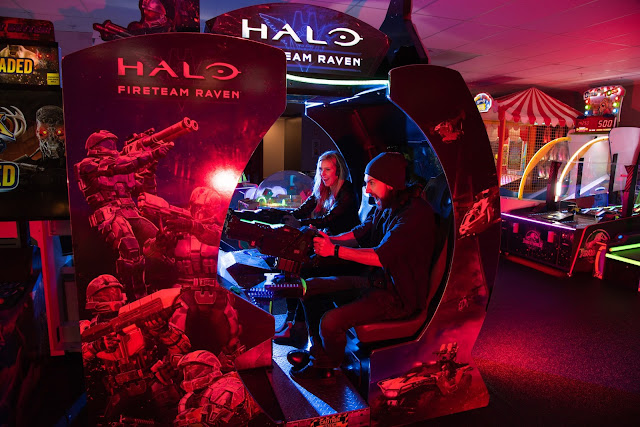 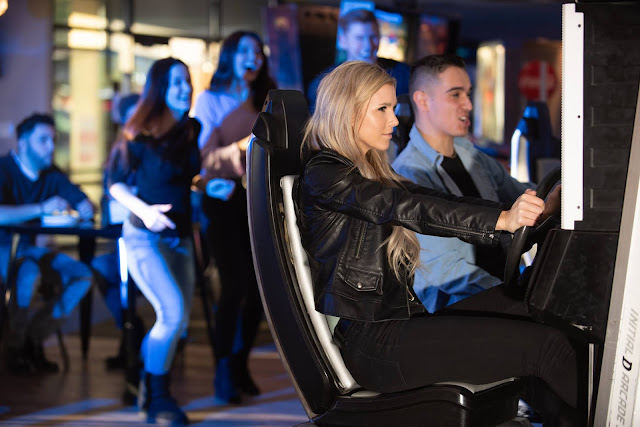 Chaos is more then just an arcade, the front wall of the space is filled with Virtual Reality booths for a VR gaming experiences of all kinds. And, the center of the space is home to their own cafe serving coffees, espresso, boba tea and selection of beers and wines. 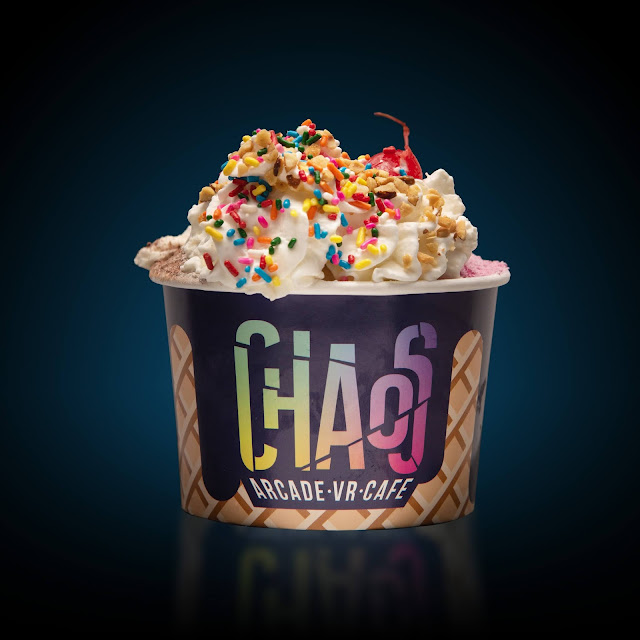 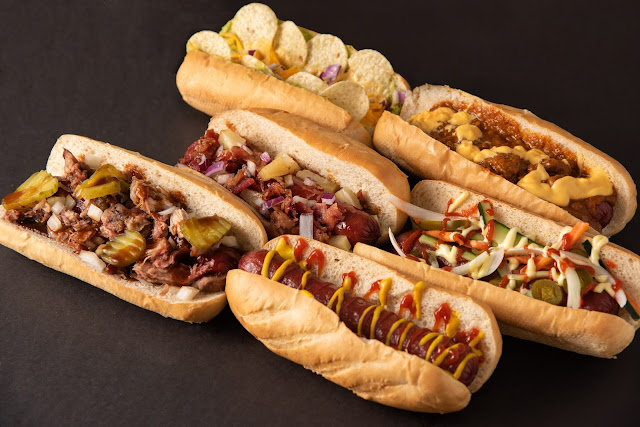 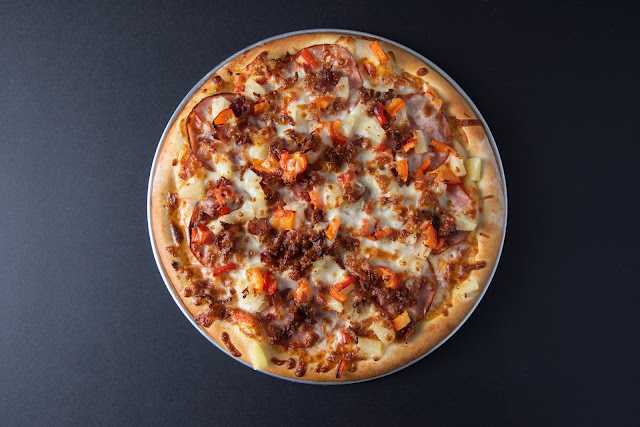 A food menu is also available at the cafe with pizzas, gourmet hot dogs and more. Indoor dining is available and a party room is coming as soon covid restrictions allow.  Currently Chaos is open Tues-Sun. 11a-9p, for more information check out their website at http://chaosarcade.com and follow them on social media.

Posted by Matthew Behringer at 7:16 PM

A large red crane is now up and changes are coming to the building formerly known as QualMed Plaza. The building has sat the corner of Sixth & Stevens on the Lower South Hill for decades, filled with an array of medical offices. But the offices that remain are working on their own new spaces to move to as construction crews have already started the process of converting the building into a new option for urban living in Downtown Spokane. 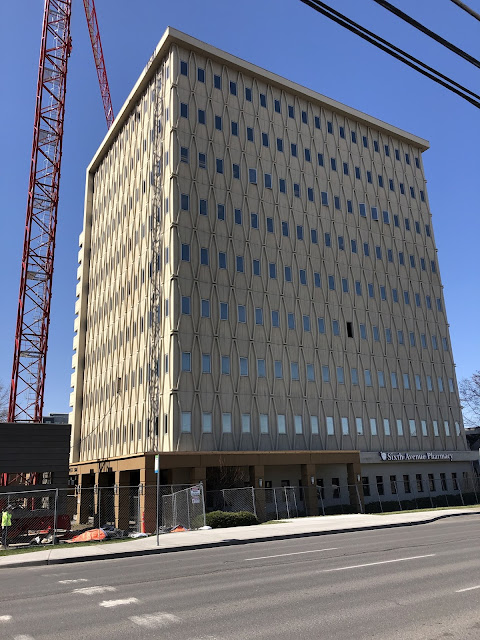 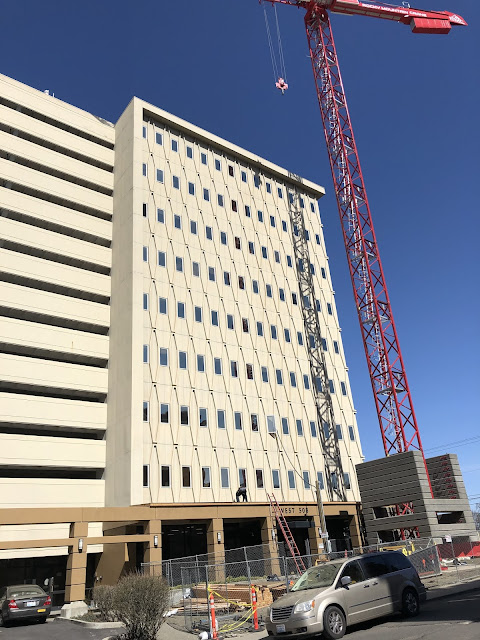 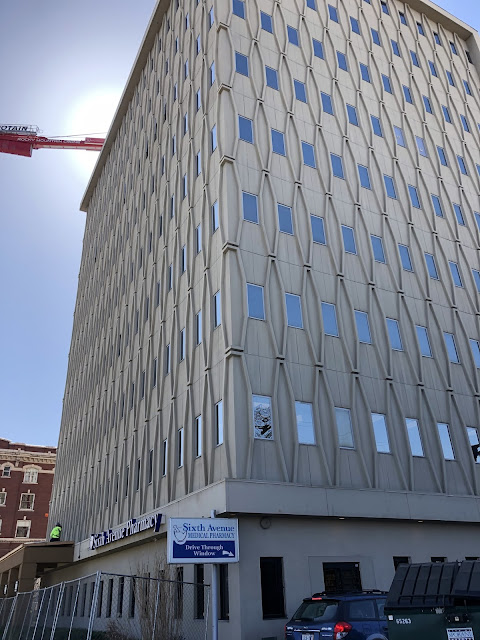 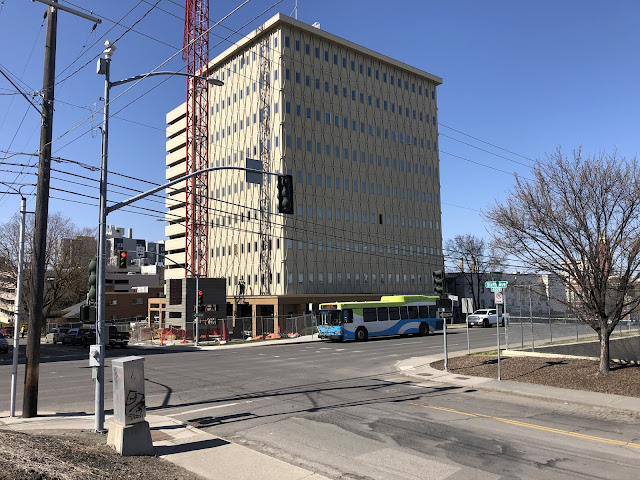 Brumback Construction of Spokane is both the contractor and developer on the project that will re-develop the ten story structure in the 508 West, a play on it's address at 508 W. Sixth. The plan calls for converting the main building and it's attached parking garage into apartments, 117 new units in all. The apartments will be available as upscale studio, one and two bedroom units. When we reached out they said they don't have a set rental rate just yet but will likely have a " wide range of pricing ".

The building will also feature a rooftop terrace and amazing views of Downtown Spokane, which is within walking distance of the development. Also, the ground floor will retain it's commercial use with a pharmacy, hair salon and coffee shop.

They indicate the first of the apartments will be able for move in this Fall, with more phases to be released shortly after. Brumback is already gathering an interest list on their website, which also includes some awesome renderings of what the finished project will look like. For more info on that please check out http://brumbackre.com/livethe508.html

Posted by Matthew Behringer at 7:47 PM

Recently I've seen a few local news articles about new developments that might become " the next Kendall Yards ". From Greenstone's planned Mead Works project by the North Spokane Costco to a project in the Latah Valley. But, a project just now getting underway in Liberty Lake will likely be closest to that goal of the next Kendall Yards.

Although not a copy of the project by any means, Greenstone Homes, the same developer as Kendall Yards has started some commercial construction for the River District Town Center. The development is the commercial portion of the River District subdivision which has been under construction along the Spokane River on the north side of Liberty Lake for over a decade now. 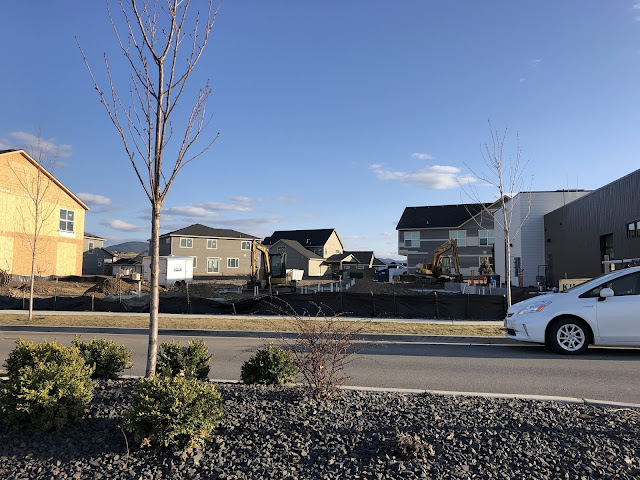 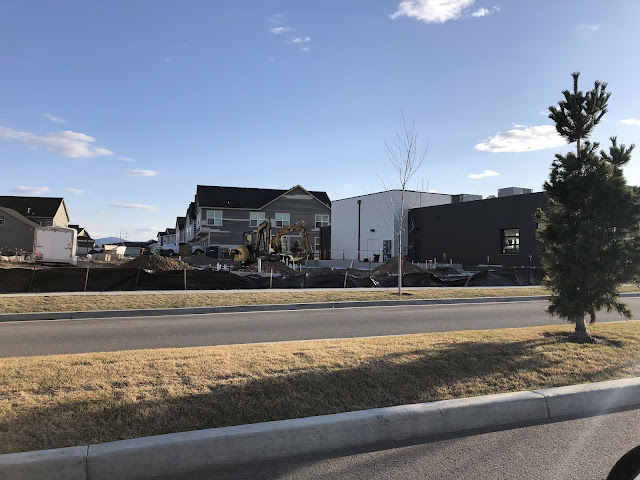 The first portion began last year with the opening of a small commercial building across from Orchard Park, which already houses Sweet Annie's Ice Cream and Hello Sugar. Construction has gotten underway directly behind that building that will add a second location of Liberty Lake Children's Academy and permits also show an un-named pizza restaurant. 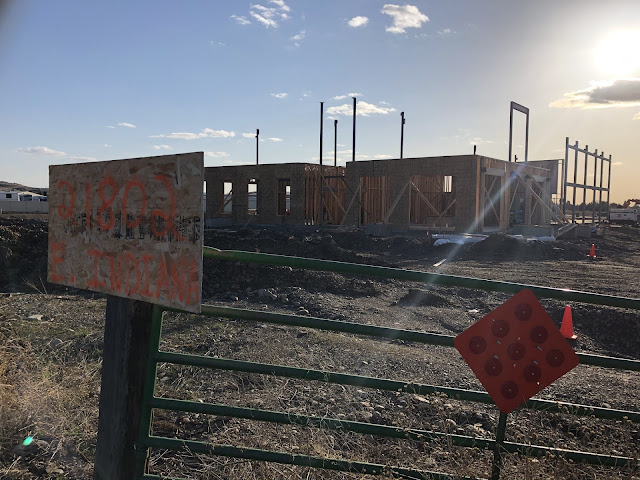 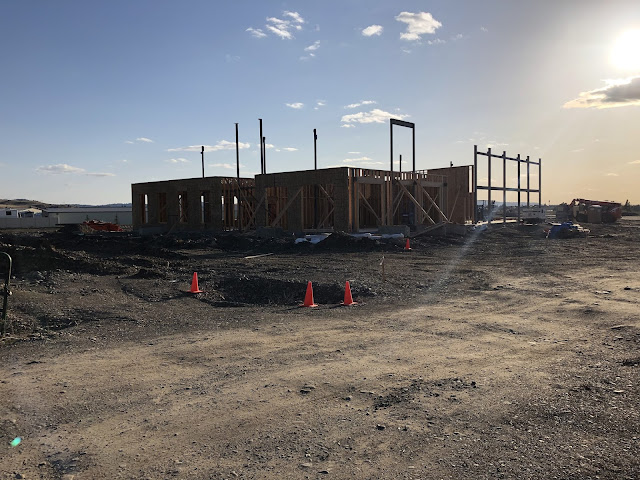 Construction has also recently vertical for a building nicknamed the " River District Welcome Center " closer to where the main development will eventually be. This building is going up off of N. Harvard Rd, just north of I-90 and permits show it will house a Greenstone Homes sales center, a restaurant and at least one salon. No exact businesses in the building have been named just yet however.

Construction will also start sometime this year to the north of the Welcome Center building for a new " brew + mead " business and a winery. Information we've found indicates those two businesses will kick off a " Artisan District " where local businesses will produce a product and sell said product under the same roof.

The River District Town Center project is still early in it's development but we do expect to hear a lot more about it in the near future. What would you like to see open in this development?

Posted by Matthew Behringer at 12:52 PM