In the past few weeks I've received dozens emails and messages pertaining to a new construction project at the corner of N. Division & Lyons in North Spokane. At first I accidently replied to a couple people indicating it was likely connected to the future Amazon Delivery Station project just north of there. I apologize as that is actually not the case, the parking area for that project will be in the vacant lot directly next to this project and this is completely separate.

The excitement over seeing construction at this site is likely due to a couple of projects that we're to be built on the same parcel in the past. Originally the site was to be Spokane's first Popeye's Louisiana Kitchen, they backed out shortly after opening their location in Post Falls. And, for a short time there was an agreement to build a Habit Burger Grill there but they also backed out. Interestingly enough though Habit Burger Grill recently announced plans to build in the Tri-Cities, so maybe they will still come this way eventually. 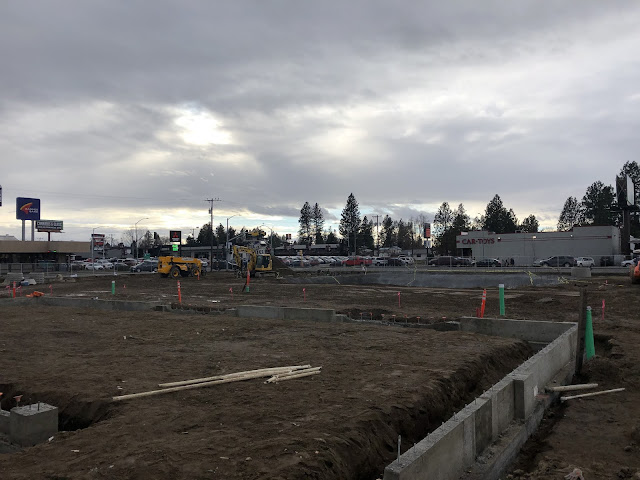 In fact the construction we see at the site, which is on the northeast side of intersection is for a new Maverik gas station and convenience store. Adding to the Utah based chain's growing number of locations in our area. This new Maverik will be similar to their other stores with typical c-store merchandise and hot foods, made under the company's BonFire Grill brand of foods from burritos to pizza to deli items and more.

The store will be 4,425 square feet, surface parking area and six fuel islands with pumps on either side. There is no opening date indicated for this new store just yet, for more info on Maverik, visit their website at http://www.maverik.com

Posted by Matthew Behringer at 6:27 PM