Construction to begin for new hotel at Spokane International Airport

It's been a year this month since we first caught wind of a plan to open a new hotel at Spokane International Airport. This amount of time is not a complete surprise with permitting, financing, etc.. these projects do take time. But, now we're seeing that construction is actually about to begin.

The new hotel will be part of Springhill Suites by Marriott chain, unlike the Staybridge Suites name that was mentioned early in the process. This new hotel will be the closest lodging option to the terminal and will be in what is currently part of the Airport's parking area. We're told actual construction on the hotel should begin in September and Airport personnel have already blocked off this section of the parking lots. The new Springhill Suites hotel will be in-between the car rental area and the Ramada hotel, near the parking exit plaza. 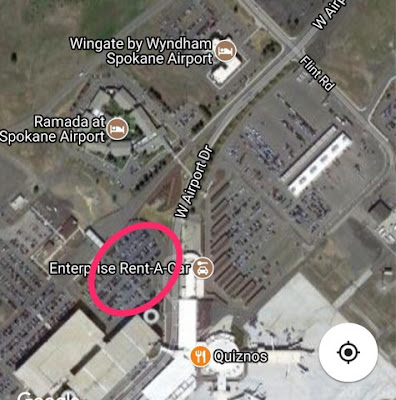 Tharaldson Hospitality Management of Fargo,ND is developing the hotel, which is scheduled to open in the last half of 2019. The new Springhill Suites will be a 4 story building with modern looking architecture and 110 total rooms. An indoor pool, fitness center and a business center will also be included in the finished building. Tharaldson is also currently developing a Staybridge Suites hotel at Coeur d' Alene's Riverstone development which has been under construction for a few weeks now. 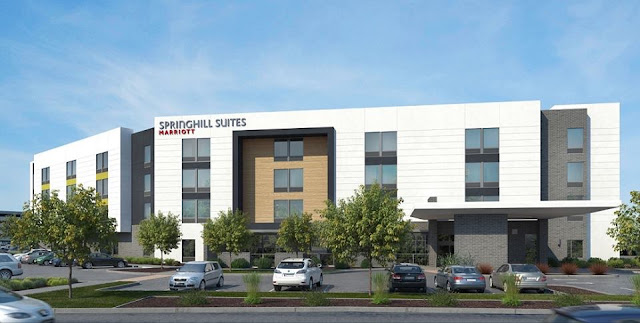 Above- a rendering of the new hotel.

The new hotel project is due in part to recent increases in passenger traffic at the Airport, with several new flights now flying out of Spokane. Some might be concerned about the removal of parking spaces at a growing airport. However they are quick to point out that the airport is currently working on a large expansion to the economy parking area which will create 1300 new parking spaces near the corner of in-bound Airport Dr. and Flint Rd. . Major renovations are also in the works for the near future within the terminal and we expect to be hearing more soon about the airports gas station/ c-store / fast food development planned along another section of Airport Dr.

This will be the first location of the Springhill Suites by Marriott chain in Spokane, although there is one not far away in Coeur d' Alene. The chain operates over 350 locations, all of which are all suite hotels and geared towards the upper-moderate lodging segment. This will be the third hotel on property at Spokane International Airport, with 165 rooms and the Wingate Inn & Suites with 83 rooms.

Keep watching for more as we'll likely re-post when the Springhill Suites at Spokane International Airport gets closer to opening.


Posted by Matthew Behringer at 9:09 PM