Plans show possible " delivery station " coming to former Lowe's on N. Division, could this be another Amazon project? 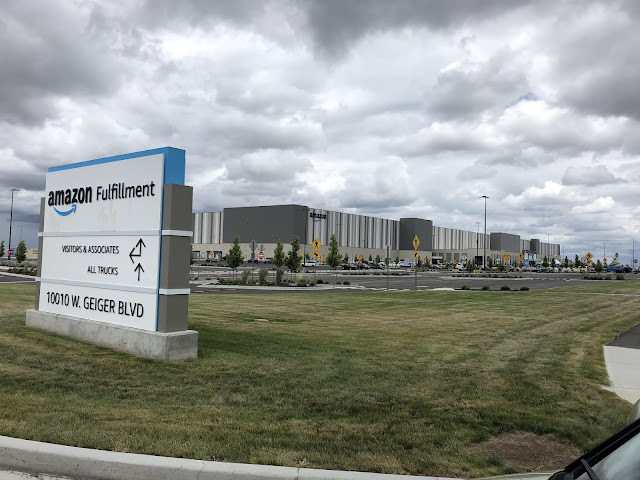 INBW staff photo- the recently opened Spokane Amazon Fulfillment Center on the West Plains.
It's a project that's still early in the process, but a large company is working on plans to convert the former Lowe's store at 6902 N. Division into a warehouse of sorts. The site has not even gone to permitting and is only up for a "Pre-Development Application" but the documents filed along with the plans indicate this could be another Amazon related project.

The Amazon name is not on the documents but the contact info is company in Seattle and it's called a " delivery station " which is the name of the smallest form of Amazon warehouse's. An Amazon operated site describes their delivery stations as buildings where customer orders are prepared for "last mile" delivery to customers.

Regardless of who the company is behind the project in Spokane, it's large and seems like something that would bring new jobs to Spokane. The majority of the building ( 116,000 square feet ) would be turned into warehouse space with a lane for fleet vehicles to pull through the facility at the back, five semi truck bays would be along the front of the building. A 9,600 square foot office area would also be along the front ( southern ) half of the existing structure.

The project would also add a large surface parking area. Just south of the building is a Sportsman's Warehouse store that would remain. But, new parking for employees would be on the vacant lot just south of that store. The plans call for a total of 117 " associate " parking spaces.

The project is still being planned but I do expect it to come to fruition as the questions they ask of the city imply they want to begin construction as soon as possible, going as far as to ask if they can pay for city staff's OT to approve their plans. Another section shows the project is hoping for a Spring 2021 opening.

We will watch this project very closely as it appears this project might be big news for Spokane and might move fast so stay tuned!

Posted by Matthew Behringer at 8:26 PM