Spokane has it's fair share of coffee house's and even a few tea shop's but none quite like Urban Nirvana which opened just recently in Downtown Spokane. Urban Nirvana is a small locally owned and operated business at 108 N. Washington just a couple of blocks south of the INB. And, with just 1180 Sq. feet it's not the biggest such business in the Lilac City but it is amongst the most unique. 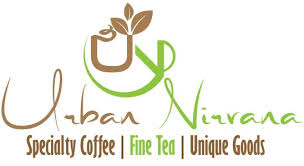 Urban Nirvana sells over 40 award winning loose leaf teas, all of which are fair trade, in addition to a good variety of fair trade coffees which can be consumed on site with some seating in the business. Some of the coffees and teas at Urban Nirvana are even world renowned and some so prized in the coffee world that they are only sold at auction ( these are while supplies last ) . They even have a white tea available that is picked by monkeys.

Customers of Urban Nirvana can also enjoy an assortment of baked goods. They also offer a full afternoon tea service as well as pour over service. They are open six days a week, Mon-Fri 7a-5p and Sat. 9a - 2p . Urban Nirvana is the new spot for Spokane's tea & coffee aficionados , but is a place really anyone will enjoy...

They also can be found on social media.
Posted by Matthew Behringer at 2:45 PM