It's far from a new idea to have a big box retailer offer a gas station in their parking lot, but with the exception of some site's that the chain leased out to other operators, Wal-Mart has not dabbled in this field. That is until now, as just a couple of years ago the Arkansas based mega chain announced plans open Wal-Mart branded gas stations with a somewhat aggressive expansion plan for the concept.

And, now the first of these new Wal-Mart gas station's in our area is now open for business on a out lot of the Wal-Mart store at 3050 W. Mullan Ave. in Post Falls. Some may actually remember a gas station once existed not far from this new one under one the above mentioned lease agreements. That gas station however has now been closed for several years and a Burger King restaurant has since replaced it. 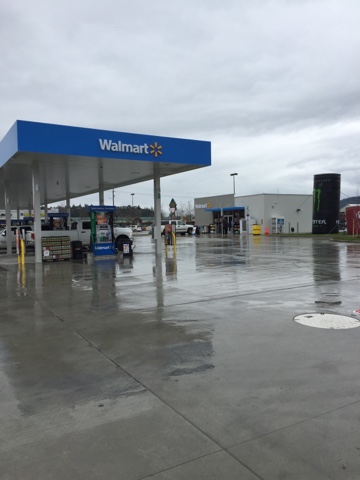 For the time being this new Post Falls Wal-Mart gas station will be the only one in the Spokane / Coeur d' Alene area , although we expect more to come, none have actually been confirmed. The new fuel center's promise affordable gas and a small store packed with many essential items. The convenience store at the Post Falls location is about 1440 square feet and has a selection of snacks, sodas , gift card / cell phone minute cards, beer and F'Real milkshakes.

The new gas station opening means the creation of about 8 new jobs and it will be open daily from 5am - 11pm.
Posted by Matthew Behringer at 2:24 PM