We reported in Feb. of plans in development for the first duel branded hotel in the Spokane market. Now we have received the details that construction is about the start on project which will be built on the West Plains and replace the dated Airway Express Inn at 3809 S. Geiger Blvd just off of I-90.

Demolition will commence first on the Airway Express Inn first with construction on the new hotel likely to begin by the end of October. This new hotel will be both a Sleep Inn and a Mainstay Suites, a concept some companies are using more and more actively. The current plan is to have Sleep Inn / Mainstay hotel open for business by July of 2018.

Construction will be done by Consolidated Construction Co,Inc a full service design/build firm headquartered in Appleton,Wi.. H&H Hospitality of Spokane is the owner and it will be operated by the Lighthouse Hospitality Group. 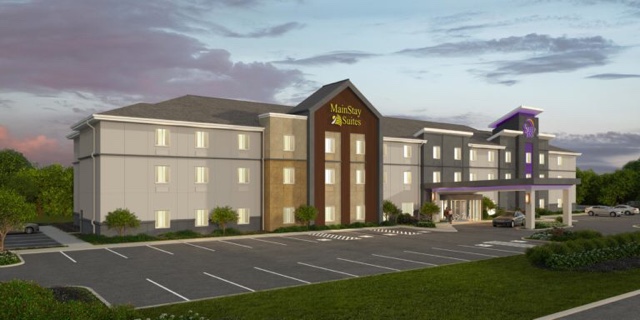 Here is what the new hotel will feature-

And, a "marketplace" c-store.

The hotel will have both the Sleep Inn and Mainstay Suites branded rooms under one roof ( about half/half room wise ) . But it will all be ran from one single lobby / front desk. Both brands are part of Choice Hotels a Rockford, MD. based company that has multiple other brands and over 6000 hotels worldwide in several different countries.
Posted by Matthew Behringer at 8:38 PM