VOA's Hope House to rise, but it's not quite goodbye for Linnie's Thai

Volunteers of America is planning a new building at 1301 W. 3rd, just southwest of Downtown Spokane. They plan to relocate and expand their Hope House programs from a much smaller building at 111 W. 3rd to the new structure.

The new Hope House will be a 4 story modern looking building with a ground floor homeless shelter, offering 120 beds designated for women. The upper 3 floors with will have 60 studio apartments for people who are trying in dire need of housing and may be on the street otherwise. They also plan on site support offices, class room space and a full kitchen. Construction will likely start in early 2019 and be completed later that year and will double the capacity of Hope House. 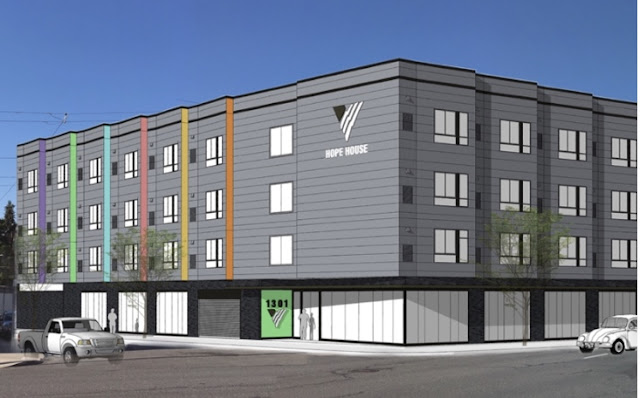 Currently the site, which at the corner of 3rd and Adams is home to a long running Thai restaurant called Linnie's Thai. Volunteers of America does plan on demolishing the restaurant but despite a story from another business news source saying " Goodbye Linnie's Thai " it's simply not the end.

Linnie's Thai will remain on W. 3rd through the end of July and move after that. Currently Linnie's Thai plans to re-open in Airway Heights sometime between August-October in or around the Crosspointe Shopping Center nearby Wal-Mart, we'll have more on that in the near future as it's still too early to confirm exact facts.
Posted by Matthew Behringer at 8:22 PM