Spokane Housing Ventures, who have already developed and manage several affordable housing developments around the area have announced their plans to for a new development in Hillyard. They plan to develop a $10.2 million project at 2830 E. Francis Ave, to be called Jayne Auld Manor. The complex is named as such to honor their former director who passed away in 2016 and dedicated her life to serving low income people and families. 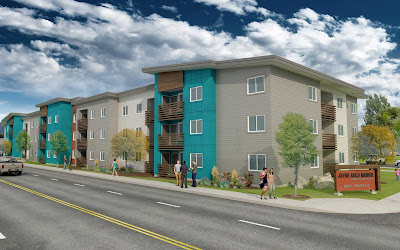 As is currently planned Jayne Auld Manor will include 48 total units, which will be geared towards the workforce population who make less then 60% of the median income. The site will have a 3 story main building and five duplexes, in addition to a small playground and community garden. Twenty five of the units will be 2 bedroom and twenty three will be 3 bedroom apartments, making the development welcoming to family's.

Construction will start at the Jayne Auld Manor site early next year with completion planned for the Spring of 2020.
Posted by Matthew Behringer at 8:00 AM