Not just Amazon coming to the Geiger Blvd corridor

Creating over 2000 jobs in a massive new warehouse, Spokane’s planned Amazon fulfillment center is the biggest project going up on the West Plains. But, it’s far from the only thing coming to that area.

Spokane County is applying for a grant to upgrade Geiger Blvd. and a couple other roadways in the area. The news about that grant can be found at http://www.khq.com/story/39252075/16-million-grant-requested-for-geiger-blvd-infrastructure-improvements

But, what’s news for this site is the sneak peek at other projects via a map included in the grant documents. I’ll include it below, but it shows Kenworth is planning a facility to employ 150, Shredfast also has a building in the works. And, many new homes and apartments are also in the works. 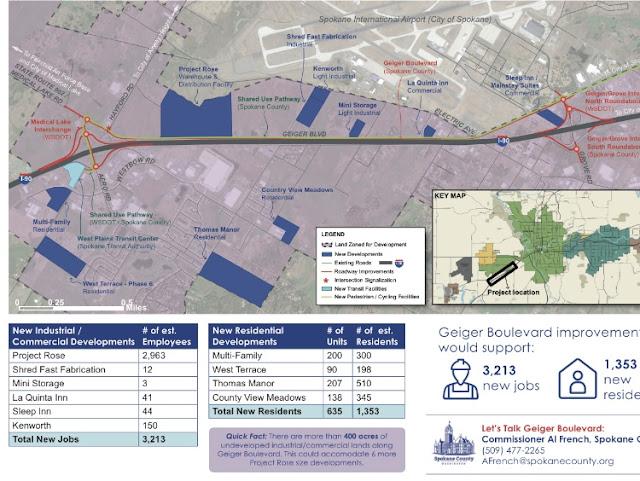 This won’t all happen overnight, and I know the LaQuinta Inn project has been in the works for approximately two years now so it’s impossible to predict any of these projects but it’s safe to say the West Plains is growing!
Posted by Matthew Behringer at 9:27 PM