Flatstick Pub, a Seattle based pub and restaurant has announced they will open in the remaining vacant street level space of The M building ( the former Downtown Macy's ) in Downtown Spokane. Flatstick Pub is a unique concept developed by Spokane natives Sam and Andy Largent. There locations are casual beer pubs that also feature a challenging 9 hole miniature golf course in the same place. 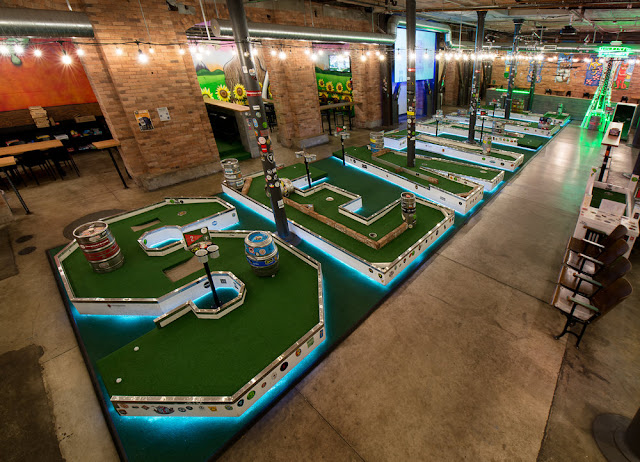 An example photo from one of Flatstick Pub's Seattle locations

In addition to the mini golf, customers can play a selection of golf themed games that we're invented by Flatstick. Those include Duffleboard, Cup Hunter, Stick Putt and 2 more new games set to debut with the opening of the Spokane location.

The Pub will have 30 taps pouring only locally made beer, cider and wine. The owners also will partner with Seattle based restaurateur Ethan Stowell to develop a cool new food menu. The entire place will be open to all ages until 7pm each day and they note it will even by dog friendly.

The Spokane Flatstick Pub is to open late this year, and they are also developing another location in Tacoma that will open around the same time. Currently they operate 3 very popular locations in the Pioneer Square and South Lake Union neighborhoods of Seattle and one in Kirkland. The company was founded in 2014 and has grown quickly, as is expected of such a cool and unique concept. They also are excellent community partners, giving $140,000 to charites in 2018 and they plan to continue donating in the each of the areas they operate.

For more info on Flatstick Pub, check them out online at- http://flatstickpub.com


Posted by Matthew Behringer at 11:41 AM