After being abandoned for over a decade, signs of life are already returning to former Otis Hotel on the western edge of Downtown Spokane. The building, which stands at the corner of W. First Ave and Madison is undergoing a full renovation into a boutique hotel with restaurant within the same building.

The building will be part of the Hotel Indigo chain, which is part of IHG and is primarily boutique style hotels in urban areas. Signs for the new hotel went up this week, the original windows, now fully restored have been uncovered and hard working construction crews are a regular site at hotel. Both the Hotel Indigo and the new restaurant are to open for business in early March of 2020. 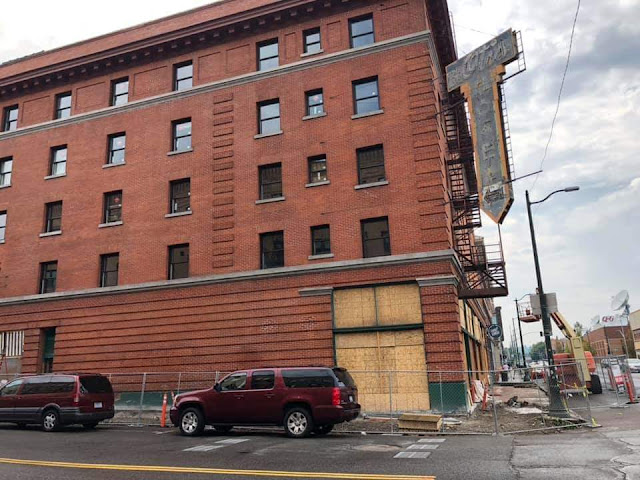 Matt Behringer/ INBW - This photo was taken in August but shows the building under construction.

The restaurant will be called Magnolia American Brasserie , which will be a 4500 square foot French inspired restaurant from Patrick McLaughlin who was the former food and beverage manager for the Davenport Hotel. Magnolia will have a full bar, dining area and banquet space, the exact menu is still under development so keep checking back for updates.

When the Hotel Indigo opens in the Spring it will have 112 guest rooms and each of the elevator lobbies will be themed after previous names for the former SRO type hotels that once called the building home, The Willard, Atlantic, Milner, Earle and of course The Otis.

While the hotel is to open in March, reservations are open for dates after April 12th, 2020 via http://ihg.com

Posted by Matthew Behringer at 7:56 PM