Centennial Real Estate Investments, which is the real estate division of the Cowles Corp., has announced another part of their redevelopment of the former Spokesman Review Production Facility Block in Downtown Spokane.

The production facility was emptied in 2020 when Cowles relocated their newspaper production operations to a new facility in Spokane Valley. Dry Fly Distilling has since taken over 32,000 SF of that building for their own production and tasting room. While plans for the former Spokesman-Review production facility we're coming into focus Centennial says in a recent release that they took the time to evaluate options for its adjacent site at 1023 W. Riverside (The Chancery Building).

That building was vacated in 2019 due to safety and operational concerns.

"We agree with our partners and community leaders that housing must be a priority at this time, given Spokane's unprecedented growth and limited rental market. We see a need for housing that accessible to our working professionals and others who work in Downtown Spokane. Stable housing is essential for healthy communities"  says Doug Yost, VP of Centenial Real Estate Investments. 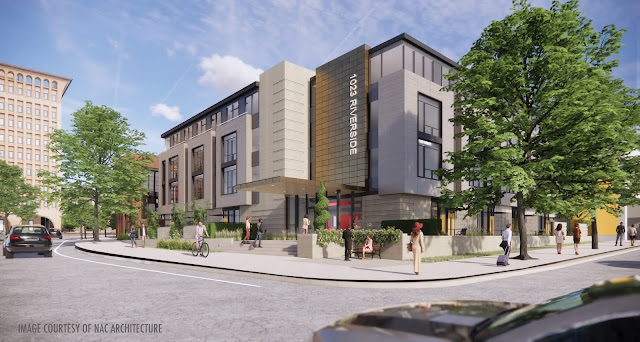 The proposed plans include a new 40-50 unit, 2-bedroom and 1-bedroom apartment complex with modern amenities and community courtyard and nods to the architectural details currently found with the previous building.

The new building would join The M and The Chronicle Building apartments in Centennial's already operating Downtown apartment portfolio. " We have waiting lists on both properties, and I can't remember the last time we had a vacancy at the Chronicle Apartments for more than a week " said Byrn West, VP of the company's property management division.

Stay tuned to this site for more as this project progresses.

Posted by Matthew Behringer at 1:43 PM