Mixed use development in the works in Airway Heights

A new mixed-use development is being planned on the east side of Airway Heights. Spokane based Cedar and Sage,LLC will be the general contractor for the project which is to include 93 apartment units and 15,000 SF of commercial space, with a fitness center planned for tenants leaving about 14,000 SF open to lease out to businesses, with none mentioned just yet as those spaces will be redelivered as a warm shell with built to suit opportunities coming available once the project advances. 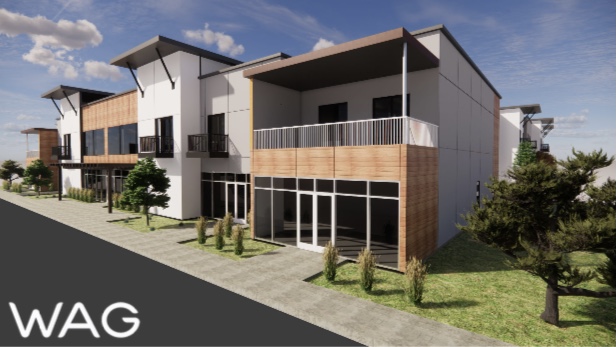 The project, currently called Airfield Apartments would be built on a presently vacant parcel in-between 10th and 12th Ave., just east of S. Garfield Rd. , or about one block north of US 2. Building permits have not yet been applied for but the project did go through its SEPA application / comment period in December, and we reached out and have been told that construction is planned to start in May 2023 with an estimated completion in the first quarter of 2024.

The Airfield Apartments project site plan shows it will consist of 4 buildings with 2 three story residential only buildings in the middle of the lot and smaller two-story buildings facing both 10th and 12th Ave. with ground floor commercial spaces and apartments above. Surface parking will also be built on the 4.67 acre site with 178 stalls and 17 bike racks included.

In addition to Cedar and Sage,LLC acting as the contractor, Wolfe Architectural Group is providing the architectural design work.

Posted by Matthew Behringer at 1:52 PM