Thanks to a reminder from Urbanspoon that I haven't logged in, in awhile. I was reminded that I also haven't done a review of any new Spokane area restaurants for quite sometime. So here it goes... Today's review is of what I would call a newish restaurant because Barlow's has actually been in business locally for a little more then five years.

But, a few months ago Barlow's moved out their original small restaurant to a new, much bigger location that is free standing and new construction built just for use by Barlow's. With the move to the new building Barlow's also changed their name to Barlow's at Liberty Lake. The "at Liberty Lake " portion was added to allow the business to expand and open elsewhere in the future. However, there are no immediate plans to create any additional restaurants. Although Barlow's is a great ,locally owned and operated business that I hope does manage to work it's way into more location in our area soon.

Barlow's at Liberty Lake is a calm, clean restaurant with very friendly staff that is well worth a visit. The menu is made up of a little of everything you'd expect from an American cuisine restaurant like the photo below. The menu is made up burgers, sandwiches and appetizers along the left page with fair pricing and a right page of entree's which admittedly are a bit higher priced but also fairly priced and on par with the big chain restaurants that dot the landscape.

During my visit the Barlow's at Liberty Lake, I chose from the sandwich side only. As a huge fan of Philly cheesesteaks I ordered one. And it showed up looking just as delicious as I had hoped... 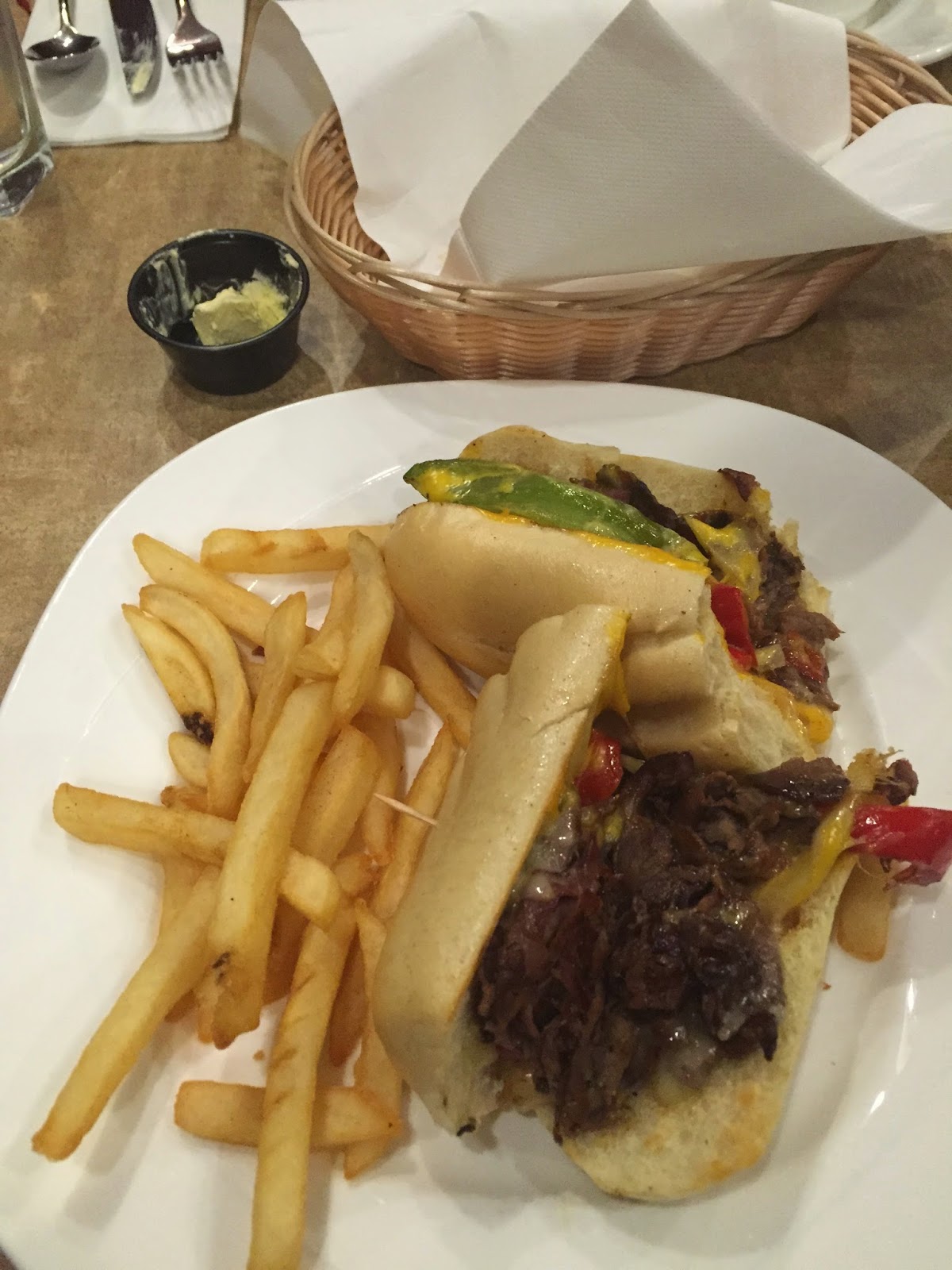 The Philly showed up after a basket of bread, a delicious soft bread that was sliced and interestingly enough what appeared to be the same bread as was used for the sandwich . As you can see above the sandwich was a bit heavier on the meat then the peppers and cheese. But rest assured these are not absent and on a personal level it was welcomed.

Temperature was good and delivery time to our table was also as expected. After the sandwich and accompanying fries I was too full to divulge in dessert but there are dessert menu options. In addition to dessert Barlow's at Liberty Lake also has full bar menu. I think the prices are slightly higher then some local establishments but are still fair. Here is a look at Barlow's signature drink menu. The other side of this menu card highlight more drinks, created specifically for the winter season.... 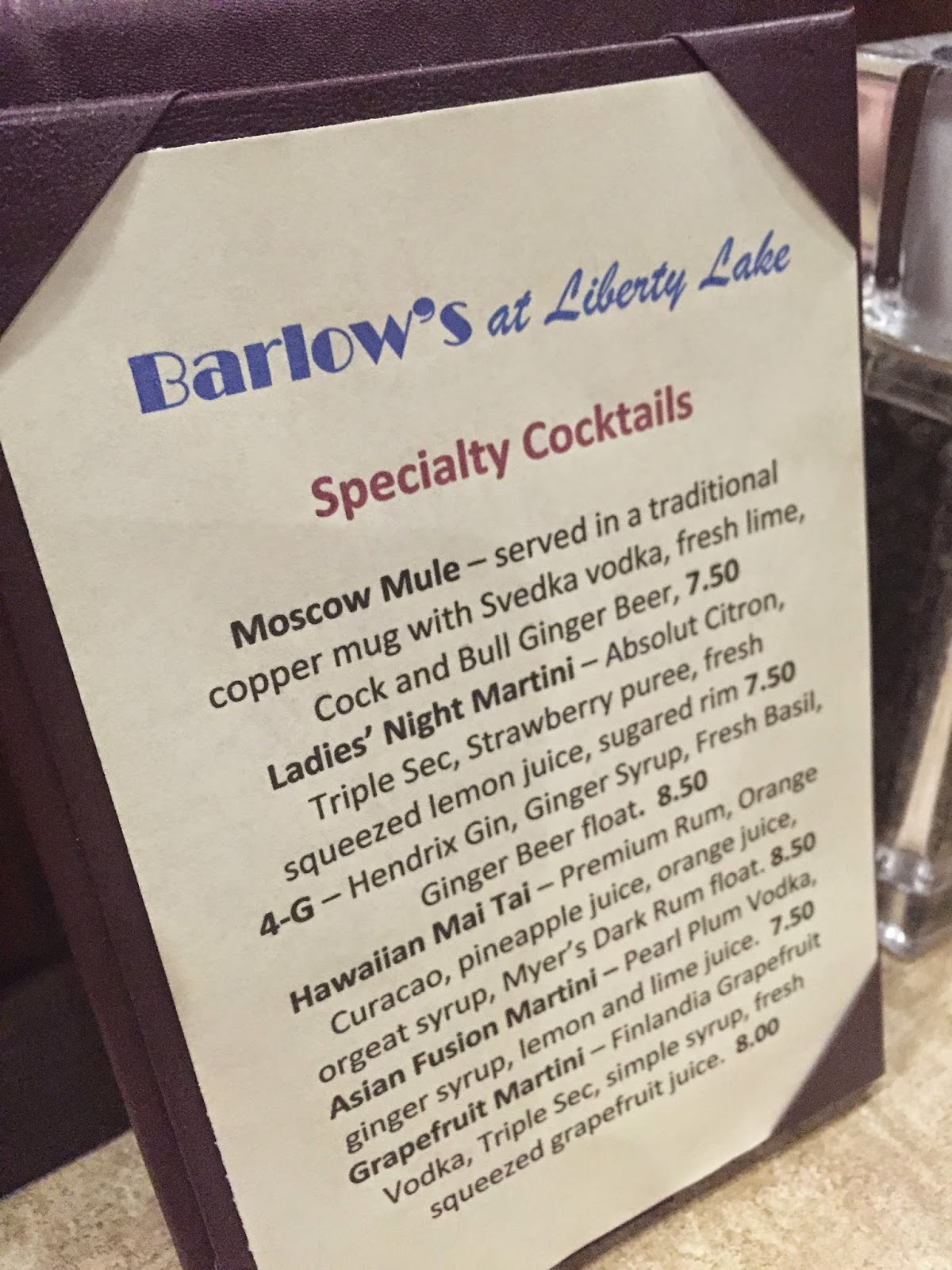 Drinks are also available in the on site " Alicia's Market Side Lounge " which is immediately to the left upon entering the restaurant. The restaurant itself is pleasant but not overly decorated. There is some basic art of vehicles , etc... . On one wall however is a large mural that features the history of Liberty Lake, a city with a very interesting history.
I do plan to go back to Barlow's and is worth the drive out the Liberty Lake for a nice night out or maybe even quick breakfast / lunch.
Barlow's at Liberty Lake is located in, of course Liberty Lake. Here is their info and a link to the their Facebook page-
Barlow's at Liberty Lake
1428 N. Liberty Lake Rd.
Liberty Lake,WA 99019
PH: 509-924-1446
Like Barlow's on Facebook at-
https://www.facebook.com/pages/Barlows-at-Liberty-Lake/363676347105107