The relatively small plot of along Appleway, just northeast of the Northwest Blvd exit off of I-90 in Coeur d' Alene has been proven to be a great spot for new restaurants to open. Two chains that are new to the area have already opened there, one being the Inland Northwest's first Cracker Barrel which opened last fall. And, the other is Coeur d' Alene's first Firehouse Subs location ( Spokane's opened a few months earlier ). 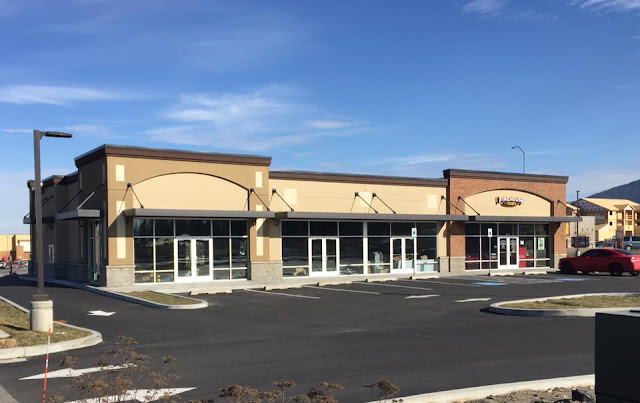 Cracker Barrel is in there own building but the newly opened Firehouse Subs is in the end cap of an otherwise vacant strip mall, which can be seen above. And, it's those vacant spaces where we are finding two more businesses coming soon. Here's the details on those-

Just weeks after the first ever Incrediburger & Eggs opened to much fanfare in Downtown Spokane, another location is already in the works for the Ramsey Crossing development of Coeur d' Alene. This new restaurant will be right next door to Firehouse Subs.

We're told the menu will be very similar to the Downtown Spokane location. Incrediburger is a fast casual style eatery with gourmet burgers, egg sandwiches and boozy milkshakes.

On a side note Incrediburger is a business venture of local chef and restaurant owner Adam Hegsted.  Hegsted is also developing another restaurant in Coeur d' Alene as he plans to open a place called Honey & Co. in Downtown CdA where The Cellar once was. Neither Honey & Co. or the new Incrediburger location have set opening dates just yet so stay tuned....

We are still waiting on the details but have confirmed that the Spokane based Thomas Hammer Coffee chain will join the same building as Firehouse Subs and Incrediburger.

Could more new places be coming?

It's very likely that more places could be coming to the same Coeur d' Alene neighborhood. In fact, the non-restaurant related Idaho Central Credit Union just broke ground for a new branch and office building across Appleway from Ramsey Crossing.

There is also a vacant lot still for lease directly at the corner of Ramsey and Appleway and another new strip mall is still largely up for lease to the east on Appleway just past Lowe's ( where the new Pool World store is ).

All of this just a short distance north of Riverstone where a handful of construction projects are also underway. So, stay tuned...

Posted by Matthew Behringer at 7:21 PM