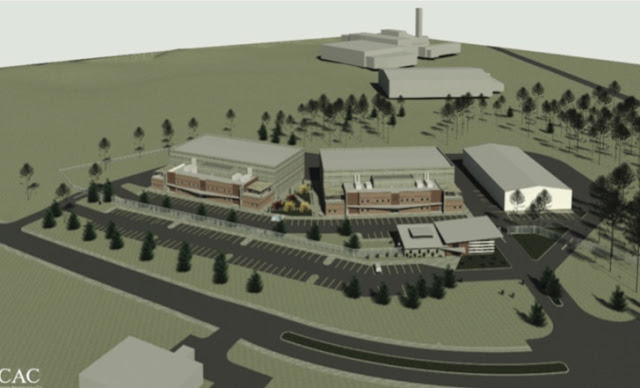 Spokane is no stranger to movie and TV filming production from the iconic Benny & Joon to the recent filming of "Boon" ,a modern day Western staring Neal McDonugh which filmed in the Garland District earlier this year. But, if Spokane native Jason Farley has his way a new film studio might be built on the West Plains bringing substantially more entrainment happenings to the Inland Northwest.

Farley and supporters are in the planning phase and seeking financing / investors for INW Film Studios which will be built as early as this summer at the corner of Geiger Blvd. & Flightline Blvd. near the southern edge of the Airport's business park property. They plan to construct the facility in phases with about 40,000 square feet of offices and soundstages once fully built out. The first phase will consist of two 10,000 SF studios and a flagship building with offices to carry out the film studios everyday operations. Future phases include more studios, expanding parking, RV hookups and a small trail system through the remaining land.

Farley says there is already a backlog of people already vying for the already limited supply of soundstages in the region. The say bringing the INW Film Studios to Spokane would also have huge economic benefits to Spokane & the Inland Northwest.

A recent article about the project in the Spokane Journal of Business ( click here for that article  ) points out that existing nonstop air service Los Angeles and Orange County benefit the project as does the nearly 1,000 hotel rooms on the West Plains that are necessary to accommodate the temporary housing needed for such a business.

A website for the business is coming soon to http://inwfilm.com or find them on Facebook at http://www.facebook.com/pg/INWfilmstudios . Also, stay tuned to INBW as we will be checking in on this project as it progresses.

Posted by Matthew Behringer at 7:52 PM