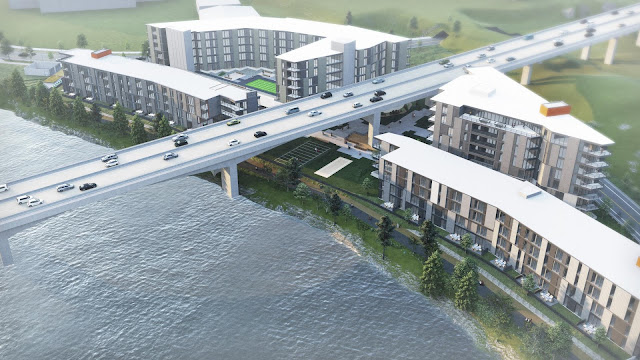 After a few years of planning, ground will be finally be broken in April on a large new Class-A multi-family development, along the Spokane River in Spokane's University District. Construction is planned to be done in phases but once fully built out this new project will offer 298 new apartments and transform a dynamic location within the rapidly growing University District.

The new project will now be called "The District" and sits on a 13.16 acre parcel with the Spokane River to the north, E. Martin Luther King Jr. Way to the south and bisected by the Hamilton St. Bridge. The ground breaking comes after the the recent announcement that the City of Spokane has approved the building permits for the first phase of the project. The issuance of the building permits is the culmination of a four year pursuit by the developer, Sagamore Capital.

University District CEO Lars Gilberts commented that " The District is helping fulfill our mission to make the University District the preferred live, learn, work, play urban environment in the Intermountain West. This also delivers on Spokane's 50 year push to transform our railyards into a vibrant and walkable urban core along the Spokane River "

Once complete The District project will consist of four apartment buildings, all being multi story with the lower buildings directly along the River and the higher behind on the South side of the parcel. The project renderings also show some green space underneath the Hamilton St. bridge.

The District was designed by ALSC Architects , Swinerton Builders, LLC will be the general contractor and DCI Engineers providing civil engineering services. The Developer, Sagamore Spokane is part of an affiliated group of companies with diversified real estate investments nationwide, including ongoing multifamily developments in Arizona and New York.

Posted by Matthew Behringer at 4:27 PM