Starting in Japan in the late 90's the Beard Papa's brand of cream puffs now boasts over 400 bakery locations in 15 countries. And now the brand is on its way to the Inland Northwest.

The location planned for our area will open soon in Spokane Valley, near Costco at 4808 E. Sprague #204. The company will occupy a 2450 SF space with Ryan Oberg, Katie Bohr and Cory Barbieri of Goodale & Barbieri handling the lease transaction for the space. 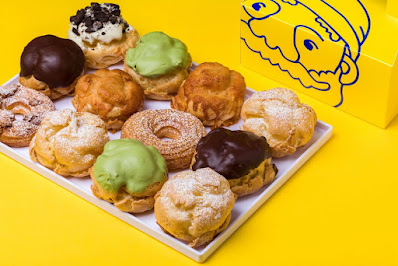 The about us page of the Beard Papa's website tells us that Beard Papa's began in Osaka,Japan and people in the city couldn't resist the aroma from the bakery or the kind face of the owner, Yuji Hirota. His fluffy white beard was so renowned that became known as " Beard Papa " to the regular customers.

The menu of Beard Papa's locations consists of their famous cream puffs where they allow the customer to choose a "shell" from an original to green tea eclair and many more and after that one can also choose a filling. A few other dessert items are also usually available, and a scan of the company's website shows some locations offer teas and iced coffees but no info if the future Spokane location will include anything extra.

This will be the third Beard Papa's location in Washington as other locations include a location in Lynwood and one within Seattle's Uwajimaya Asian Market. For info on the offerings of Beard Papa's, visit their website at http://beardpapas.com

Posted by Matthew Behringer at 8:19 PM