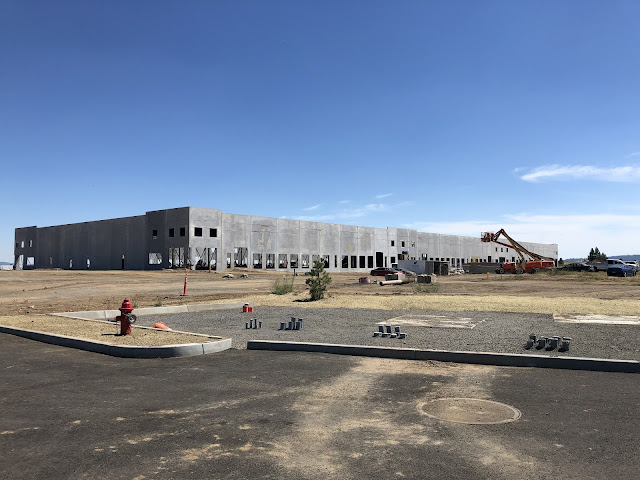 Named for the road the development is located on, McFarlane Industrial Park is growing and adding to the much-needed warehousing stock in the Spokane area. A project of Spokane Valley based developer At Industrial, the project actually started with a 187,500 SF building which has been leased to Amazon and will evidently become the Spokane area's first Amazon Delivery Station. No word however on when Amazon will start operating there, however.

Now the focus is onto phase two of the project, which will be another new large warehouse. This new warehouse is located 10921 W. McFarlane Rd and is actually larger than the first building at the site, with the new building clocking in at 218,400 SF. . There are no tenants named for the new structure, however the marketing information indicates the new building is to be dividable down to 14,560 SF, meaning we could see more than one new company set up shop in the new building.

Office spaces will be built to suit with the building boasting cross dock capabilities. 30' clear height +/- and 145' truck courts. Large amounts of on-site surface parking will be provided to tenants, as will 4.2 acres of adjacent land for storage, etc.

Divcon,Inc. is the general contractor for the building. An additional building was also planned at the site at one time, but this will likely be added as the market demands as no additional permits have been issued at the site.

For more information on the projects of At Industrial, check http://www.atindustrialco.com