Back in December we shared on this site of the bakery division of Clover's ambitious plans to branch off of the up and coming Logan neighborhood restaurant and become a much larger baking operation with lots more wholesale accounts and even a small chain of storefronts. Now flash forward to today and it looks like those hopes and dreams are starting to come to fruition...

The bakery is still owned and operated by the same couples behind Clover, but the name and size of operation have changed drastically. The bakery, which originally was in a 800 square foot outbuilding on Clover's property has been re-named Bellacrosta Bakery & Fine Foods and just recently completed their move to a former equipment rental store's building at 315 S. Dishman Rd. in Spokane Valley. 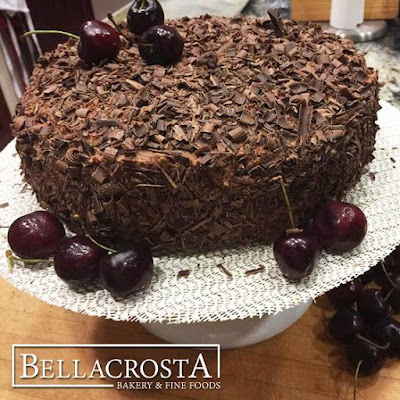 The new Spokane Valley location is a 3,000 square foot operation that sadly is only used for production and will not be open to the public. It's designed to be used to service the future storefronts and their wholesale accounts, one of which remains the Clover restaurant. Also, the new business hopes to begin online sales in the near future.

But the public won't have to wait long to try Bellacrosta's large line up of breads, pastries , cupcakes , cakes and more. This as the first of several planned Bellacrosta storefronts is already in the works and will open for business sometime this Summer. This first store will be in Liberty Lake at 1235 N. Liberty Lake Rd. Suite 109 ( same plaza as Yoke's ) . It will sell all of Bellacrosta's breads and baked goods, but also salads, soups and sandwiches in a quick service format.

We hope to learn more on the Liberty Lake Bellacrosta Bakery location as that opening gets closer. The business owners also plan to open one more retail location before the end of 2016 and more shortly thereafter . Possible future locations of Bellacrosta Bakery & Fine Foods include Kendall Yards, Downtown Spokane, South Hill and North Spokane.

https://www.facebook.com/Bellacrosta.Bakery
Posted by Matthew Behringer at 11:00 AM