Millworx, a new mixed-use development under construction in Post Falls (New bookstore and new hotel to be among the tenants!)

Located along 4th St. south of I-90 and near the junction of Seltice Way in Post Falls is a very active construction site. That's where crews are working hard on a new development that's a bit unique to the City of Post Falls, called Millworx.

The project was given the Millworx name largely because the project is re-developing land that was the formerly the home of the Idaho Veneer mill. While the project brings on a new chapter of life for the site, it still holds on to some of the site's history. A former warehouse will be kept and re-purposed into a restaurant and the former Idaho Veneer offices, have already been leased out to new office tenants including Truss Hot Yoga and Dragonfly Support Services, a mental health clinic. 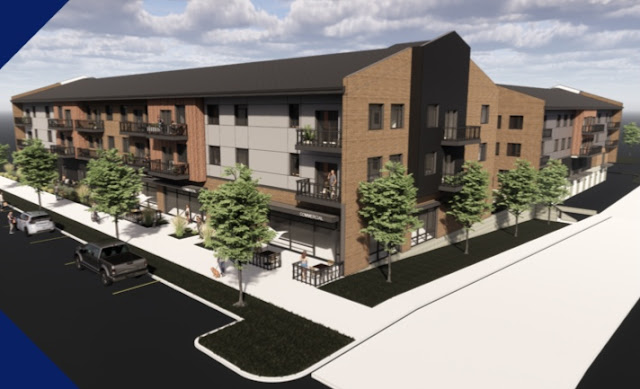 Additionally, under construction now at the 50+ acre Millworx site is a 61-unit single family townhome style neighborhood. And a 60-unit mixed use apartment building ( seen in the photos above ) with 4,421 SF of commercial space on the ground floor in three bays that are presently available for lease. 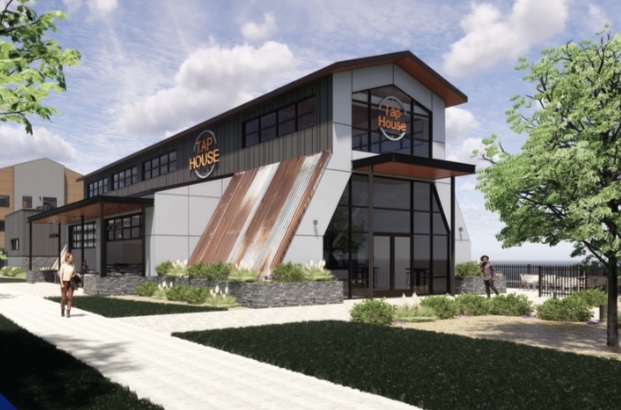 To the west of the new construction mixed-use building, is the aforementioned warehouse that is being kept from the former mill. The current plan is shown to give the structure significant renovations and a small addition to be added. It would then be leased out by a yet to be determent restaurant or brewery tenant.

The current construction work at Millworx is presently to the south of 4th St. But some of the project site's most exciting elements will be to the north of 4th St, in-between 4th and I-90. Some of this land remains for sale, but two new businesses are already committed to sites there.

One being a large new construction " duel-branded " hotel. There hasn't been official comment on the hotel to date, so we don't know the exact brands involved. Nor do we have much information about it at all just yet. However we're told it's about +/- two years out from opening. Which means construction would be likely this year, so we will keep an eye on it and as always we do appreciate news tips.

Another business to be built on the site will be Kindred & Co. Bookstore & Bistro. They are also still developing their future building but plan to open there around the Summer / fall of 2023. The store will be two stories with a rooftop space, open for the public to enjoy. The bistro section, they say won't be a full service restaurant but will likely have a menu of small bites, charcuterie boards, coffee, teas and eventually beer and wine. The menu is also still being developed.

We hope to have more information in the coming months on both of these two projects as well and intend to do separate posts about them as we are able.

For additional information about the new Millworx project as a whole, check out the development's website at http://millworx.community

Posted by Matthew Behringer at 8:56 PM