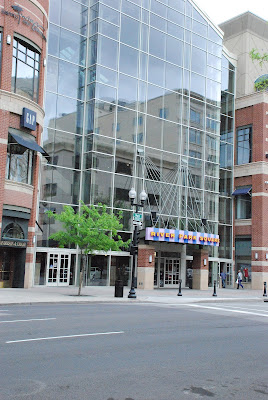 We actually already mentioned this in a previous post ( http://www.inlandnwbusiness.com/2022/08/shiki-japanese-steakhouse-coming-to.html ), Shiki a small chain of Japanese restaurants with locations in Walla Walla and Coeur d' Alene recently filed building permits to open in the the former Sushi Maru space on the ground floor of River Park Square. We're currently watching for news of an opening date.

Technically just moving from one space to another, The Small Biz Shoppe is temporarily closed as it moves from an outside space at the mall to a new space on the second floor of River Park Square near the center escalators. The store is primarily a gift shop selling wares of local small businesses and crafters that can't afford a shop space of their own.

The new location of The Small Biz Shoppe is set to open on Oct. 1st. and the former space is looking to become a new store for The North Face, who is also already in the mall but appears to be creating a new store. We're keeping an eye on that news as well.

Formerly a food truck selling Mexican snacks in the Hillyard Food Truck Pavilion, the business recently announced on their Instagram page they will be moving into the food court at River Park Square. A picture on the post indicates the business will be in the former Taco Del Mar space and they do indicate they will be expanding their menu with the new space.

Now open on the second floor of River Park Square, PNW Dream sells earth inspired goods from Pacific Northwest artists. The business has been operating since 2018 doing various shows around Spokane and the Northwest.

Joining sister brand Chico's, Soma is now open on the ground floor of River Park Square. The store takes the space of Whim Wine Bar who is still in business and has moved to the space next to the AMC movie theater on the third floor of the shopping center.

Soma has been in business since 2004 and is sells women's intimate's, pajamas, swimwear, dresses and more. In a recent press release mentioning some of these new stores, Soma is described with the motto "It's not about the runway, it's about the real way "

Also now open for business on the ground floor of River Park Square is a new flag ship store of the popular Tempur-Pedic mattress brand. They describe themselves as a leader in bedding products world-wide.

What would you like to see come to River Park Square? Tell us in the comments to this article on our Facebook page http://www.facebook.com/inlandnorthwestbusinesswatch