If your following along with us here on Inland Northwest Business Watch, you've noticed the news we posted earlier today about the site plan for the new Sportsman's Warehouse project in North Spokane. And while all that news is exciting and shows promise for that kind of depressed, formerly abandoned commercial site. We actually have even more news for the same neighborhood as another long term vacancy is about to be filled.

The former A&W fast food chain restaurant at 6730 N. Division has been acquired and is planned to have a major remodel before re-opening as a new location of a Spokane based restaurant chain. In case you need a reminder, here is a look at the former A&W... 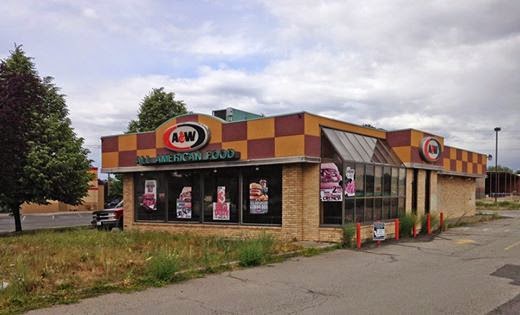 That chain is Bruchi's , a well known, Spokane based chain of cheesesteak and sub restaurants. We asked about when this new Bruchi's might open but are still waiting to hear back from the chain's staff. I'll share that info as soon as I hear. (See  update below )

This new location also has a filed liquor license for beer and wine sales. Bruchi's also operated a location in the same neighborhood near the Franklin Park Commons shopping center. That location went out of business late last year and has since re-opened as a independent Philly fast food restaurant called Phillylicious.

Bruchi's has numerous locations around the Northwest including a handful in the Spokane area. For more info about the company visit-

The new Bruchi's will be opening or about October 1st.


Posted by Matthew Behringer at 4:00 PM