On the afternoon of June 5th, a small brush fire swept up to the commercial building housing Allie's Vegan Pizzeria & Café at 4803 N. Nevada . While the building itself was not a total loss, it did put Allie's , a newer but still very popular Spokane business in a bind. Allie's has since been operating in a temporary set up in the parking lot of a building in the middle of the Garland District, but with colder weather on the horizon and the possibility that the building on Nevada won't be ready till towards the end of the year it was time for Allie's to find a new home, at least for now. 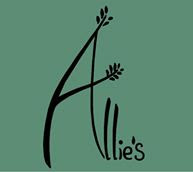 Allie's Vegan Pizzeria & Café announced just last week that the business does plan to re-open on Nevada, but they are have also leased a storefront on the South Hill and already actively working on that site for another location. The business says that they may keep the South Hill location open even after moving back to Nevada, depending on how well it does.

The new South Hill Allie's will in the end cap space of the strip mall at 1314 S. Grand , a popular area just blocks away from Downtown. They do have some work to do to the space before opening but they hope to be in business there within the next few weeks. The new location will continue on with the same menu, staff, etc...

Allie's Vegan Pizzeria & Café for those who don't already know is a restaurant making many of the same dishes as other pizza places,only making them vegan . The menu consists of many specialty pizzas , some sandwiches, breakfast items and more. They also make several of their menu items gluten free ( consult menu for which are gluten free ) and have ok selection of beer's , wine and hard ciders in addition to coffees and house made soda's.

For more information on Allie's Vegan Pizzeria & Café , including their menu and information on when they might open on S. Grand, visit them on their website at-

Posted by Matthew Behringer at 4:57 PM