The Wake Up Call, a Spokane Valley based small chain of coffee shops is expanding again. In 2015 they opened their 5th location at 3526 E. 5th Ave in the Freya / Thor couplet near Fred Meyer. But now The Wake Up Call is now heading even more into the Spokane proper with 2 locations they now have in the works.

The company officially announced they will start construction soon on their sixth location in North Spokane. The new North Spokane location will be built on the lot that was formerly the Home Environments store at 6909 N. Division ( corner of N. Division & Wedgewood ) . The retail store has already been demolished and construction is coming soon for the new Wake Up Call. It will be much like their existing locations in Spokane Valley with a drive though and small indoor lobby / seating area. And, of course it will use the easily recognizable London phone booth style building which surely has caused a few area visitors to do a double take as they drive by. 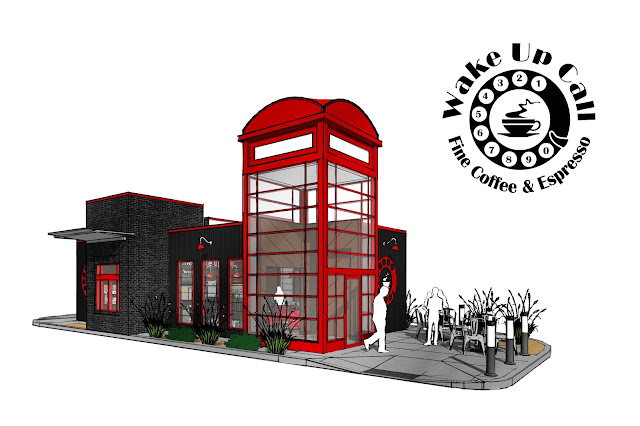 (Note: this photo is an example rendering of a Wake Up Call location, it may not be an exact rendering of the 2 locations mentioned in this article. However it will be similar. )

In addition to the North side location and likely not as far along in the planning process, Sweeto Burrito has shared that The Wake Up Call will be their neighbor by their new location now under construction at N. Division & Nora in the University District. This is the site in the Division / Ruby couplet where several older buildings we're recently demolished. We have reached out to Wake Up Call as to when the University District location will open but as of now have not received a response. The Wake Up Call planned at 6909 N. Division however they say will be open by late fall this year.

The Wake Up Call sells a menu of several specialty coffee and espresso drinks, in addition to the same drinks you'd likely find at most any coffee drive up in the area. They also have some pastries and snack selections at each location. For more information on The Wake Up Call find them online at-

www.facebook.com/wakeupcallcoffee
Posted by Matthew Behringer at 8:00 AM