Usually I don't schedule posts so early in the morning, but right now ( 6:00 am ) is the opening time for the newest Rocket Bakery in a hip new storefront Downtown. And, it's not just Rocket Bakery it's also STCU ( Spokane Teacher's Credit Union ) who will share the new space.

The joint location is in a 2900 square foot, two story space located on N. Wall St. ( 207 N. Wall ) behind the new Urban Outfitters store and immediately to the east of River Park Square. Rocket Bakery will be entirely on the ground floor and will be basically the same as other Rocket Bakery locations in terms of drinks, pastries and a small lunch selection. The items will be the same but the look of the space will be different and we expect it to be pretty cool.

We've also been told local artists Cain & Todd Benson are actively working on a mural within the new space. The mural will be large filling an interior wall, going up the stairs and will be " face-filled " and depict familiar downtown landmarks with sly nods to both Rocket Bakery and STCU. We'll hopefully be checking that out soon along with the excellent coffee's of The Rocket. 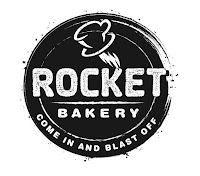 In addition to Rocket Bakery, STCU will open a branch in the space. This new branch will also open today and is a more modern and efficient location. It is to replace the STCU location that was on the second floor ( skywalk level ) of the Crescent Court building less then a block away from this new location. STCU CEO Tom Johnson had said the credit union and Rocket Bakery chose to join together in the same location due to their cultural similarities. Both have also been perennial favorites in The Inlander's annual Best of the Inland Northwest contest.

STCU is a growing locally owned and operated credit union that isn't stopping the expansion here as they are also planning to open their 21st location later this year in Airway Heights. Founded by educators in 1934 they are a not for profit cooperative with 161,000 members.

Rocket Bakery is also locally owned and operated and has been in business since 1992. Today they own a handful of locations around Spokane including their original on N. Argonne in the small town of Millwood. The business owners , Jeff & Julia Postlewait also co-own the popular Rocket Market on the South Hill that is a community hub for local food, wine and art.

And, for more information on Rocket Bakery, visit- http://www.rocketspokane.com
Posted by Matthew Behringer at 6:00 AM