It was announced back in October that a Portland based developer has acquired the former Otis Hotel building at 110 S. Madison on the west side of Downtown Spokane. His plan is to convert the building into a new location of the Hotel Indigo chain. And as it appears his renovation plan is now moving forward with an ambitious goal of opening the new hotel about 10 months after actual construction start. 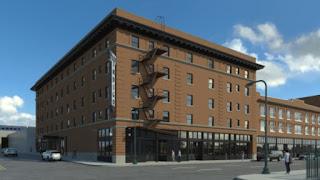 Building permits we're filed a few days ago and are now in the " plan review " phase. Fisher Construction Group, which has offices in Burlington and Spokane is listed as the contractor on the project, this is also the same company who is wrapping up work on the new passenger terminal over in Everett at Paine Field among many other projects.

We only have some details about the new Hotel Indigo itself but know it will have 112 guest rooms and they will keep / update the existing Otis sign on the outside of the building . We hope to have a post with more about that in the future. But we do expect a trendy boutique style hotel experience as this is common with the Hotel Indigo brand.

Another sign that the Hotel Indigo Spokane project is moving along, is marketing documents are now being distributed to lease spaces on the ground floor. The new hotel will have a lobby on the ground floor and they are hoping to land a new restaurant for where the Carriage House Restaurant was many years ago.

At least 2 more tenants spaces are also shown as available for lease to retail or similar businesses. In the ad it says these spaces would be available for move in during the 3rd quarter of 2018, which ads up to the developer's 10 month construction plan. These spaces will rent for between $16 and $18 per square foot and are being leased by RenCorp Realty. Several other small local businesses have also opened in the same neighborhood recently in a sort of renaissance for the area.

We expect to be hearing more and more about this project so keep watching this site...

Posted by Matthew Behringer at 3:25 PM