Davenport Collection to brand with Marriott; a name picked for the Convention Center Hotel

In addition to the branding with Marriott, The Davenport Collection has also named it's huge new hotel going up across from the Spokane Convention Center in Downtown Spokane. That hotel will be called Grand Hotel Spokane.

We're also finding what may or may not be the first restaurant going into the Grand Hotel Spokane. But we will wait on confirmation before posting on this site.

Once open The Grand Hotel Spokane will be the largest hotel in city. The hotel is planned to open in mid 2015 with 716 hotel rooms, ballrooms, meeting space as well as restaurant and some other commercial space. There is even a Grand Hotel Spokane web site up now with some floor plans. That web site can be found at- 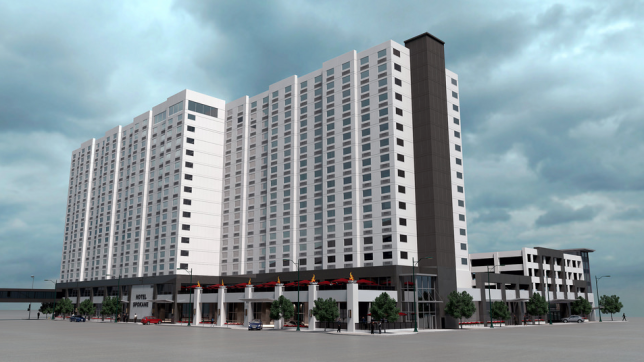 Additional renderings are also available on the hotel's main web site, listed above.
Posted by Matthew Behringer at 10:55 AM