Last week while out and about in Downtown Spokane I noticed a sign for franchise opportunities for chain of stores called Flip Flop Shops in River Park Square.

Some quick research on this company has identified that Flip Flop Shops actually identifies River Park Square mall as not only a open territory for a franchise but as what they call an " Immediate franchise opportunity" which means they plan to have store at the mall within the next few months but don't have a local business owner sign on to run it as of yet. 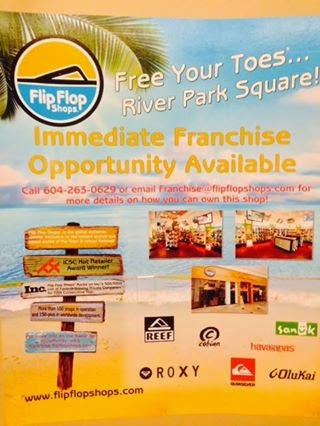 Naturally, since this new Flip Flop Shop store isn't sold to a owner yet there is no opening date, employment info or even which space they would be at in the mall. In fact it can't even be confirmed officially yet but looks way more promising then some of the other plans and rumors.

Flip Flop Shops is a INC. 500 company and considered the " hot retailer of the year " by the International Center of Shopping Centers.

The company is a retailer of flip flops and casual footwear, selling numerous big brand names. The company is expanding very rapidly with a long list of stores either opening soon or now open.

Watch for more soon, for more information on Flip Flop Shops find them online at-

www.flipflopshops.com﻿
Posted by Matthew Behringer at 10:56 AM