The rumors have been confirmed to be true! The " mystery retailer " looking to open at River Park Square and take over 17 feet of right of way on N. Wall St is in fact , Urban Outfitters.

Urban Outfitters is a chain of stores which feature clothing, accessories , footwear , housewear items and more. The chain has a large appeal to a younger crowd , college students ,hipsters and the like. While based in Philadelphia,PA the chain has locations around the World. Currently the company operates about 400 retail stores total.

In addition to the new Spokane Urban Outfitters, the company is also bringing it's very popular sister brand of Anthropologie stores to Spokane. That store was confirmed a couple of weeks ago as taking over the space in the 809 W. Main Building that currently houses the Mobius Science Center. Mobius is not going out of business however, more info on that situation can be found here ( with update coming...) :

Urban Outfitters will actually join into River Park Square in the heart of Downtown Spokane. The store is seeking to demolish the small " Saad Building " next to Mall which used to house a T-Mobile store and a handful of other businesses and be replaced with a new modern looking two story Urban Outfitters store. Here is a rendering we have obtained of what this new store / building would look like once complete- 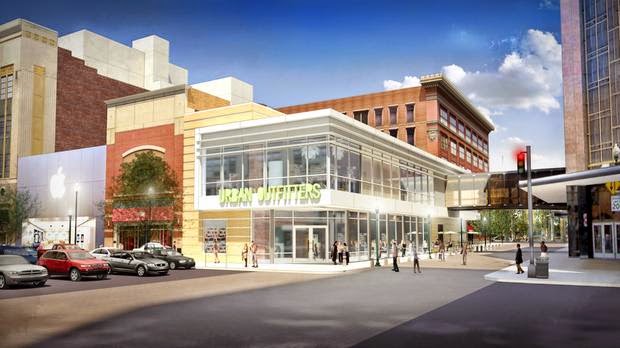 The actual construction of this new store does however rely on final approval from the City of Spokane to allow the company to use a portion of the Wall St. right of way. Which can be seen in the above photo. It is appearing at the present time that this will eventually be allowed.

This will be both Urban Outfitters and Anthropologie's first stores in the Spokane area. The Urban Outfitters store will open in 2016 and will employ a yet to be announced amount of workers.

For more information on Urban Outfitters, visit their web site at-

Posted by Matthew Behringer at 9:30 AM