Clover, a popular Logan Neighborhood restaurant and bar has operated their own small bakery in a secondary building on their property since opening the business a few years ago. The bakery's items have become a favorite of many, while not actually open to the public, except via the restaurant and wholesale account locations.

But, now the wholesale sales have caused Clover to move forward with plans to branch off the bakery into a new separate business, with locations open to the public coming soon. The bakery will be renamed Bellacrosta Bakery & Fine Foods and will be based out of a commercial kitchen space in Spokane Valley. The 3,000 square foot space is reportedly already being remodeled for Bellacrosta, but we have not obtained to exact location in the Valley as of writing this post.

Bellacrosta Bakery & Fine Foods will be a full service bakery. The products made by Bellacrosta are made only with fresh, high quality ingredients, using local ingredients when possible. I think this picture says it all about the amazing creations of what will be Bellacrosta- 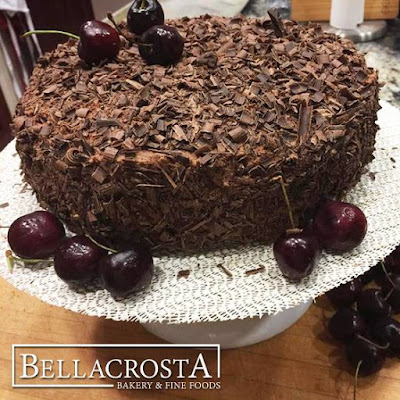 And, as mentioned before plans are for Bellacrosta Bakery & Fine Foods to have multiple retail storefronts open in the Spokane area. The new HQ kitchen space is to open early next year, with 2 or 3 storefronts also likely opening in 2016. No set in stone locations are set yet for Bellacrosta's storefronts. Although plans are for bakery storefronts in Downtown Spokane, Spokane Valley, South Hill and North Spokane.
For more information on Clover's Bakery, who is still on the same site as Clover for right now. Visit their website at-
http://cloverspokane.com/bakery
Or, find them on Facebook at-
http://www.facebook.com/bellacrosta.bakery
Clover will also still have bakery items from the new business, and will stay at their current location at 913 E. Sharp, just east of Gonzaga University in Spokane. ﻿
Posted by Matthew Behringer at 9:53 AM