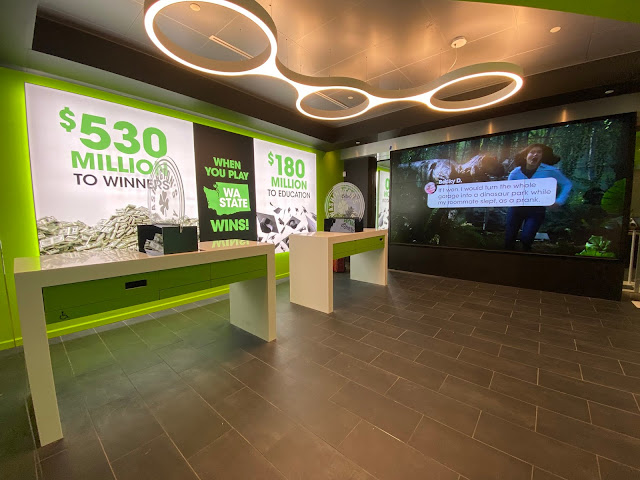 This "first of it's kind" store is the agency's only permanent retail space in the state and is a new concept for the agency. Blending the Lottery's regional operations with lottery education and ticket sales all in one location. Washington's Lottery saw a similar concept of shops used by British Columbia's Lottery that has been very successful for them and brought their own version to Spokane.

The new Washington's Lottery retail store occupies a 2100 square feet , which has a five year lease and is located on the mall's first floor near Marshall's, between Winnie's Hallmark and Lenscrafters. The space features a distinctive green-and-white design, four-leaf clover logo, and large interactive video display wall that make the store easily recognizable for both players and those interested in learning more about the Lottery.

The Department of Imagination store was designed by Sargenti Architects of Paramus,NJ as well Blake, Jarrett & Co. and state architects. The general contractor was National Contractors,Inc. . Three employees work out of the new store / regional office and their hours of operation are Mon-Fri 10-5.

Posted by Matthew Behringer at 1:28 PM