Recently on this site we shared that local businessman Ron Ayers has purposed building a new Fairfield Inn by Marriott hotel on the site that is today the Garden Motel ( 1800 block of Northwest Blvd. , near Riverstone ) . Plans are moving forward with that new hotel, but we're also now learning that the Fairfield Inn will in fact only be the start of a larger development planned for the site.

The land, which also houses a Lean Bean Coffee drive though will become a development currently named Coeurllaborate. The Hotel will be joined by a 16,000 square foot co-working facility, named CoeurWork and a 18,000 square foot business incubator space named Incoeurbator . Plans call for much of the construction to be done around the same time and have an opening date in 2017, although this is still pending as the development remains in the planning phase and the Garden Motel remains standing today.

A small section of the land will also be sold off as a pad site for likely either a restaurant or bank. Initial plans also had the Lean Bean staying as tenant on the parcel, but this remains to be seen as the site is not the largest.

The Fairfield Inn will likely be first part of the development to break ground. The planned hotel will be a four story hotel with 112 rooms and on site surface parking lot. It will help alleviate some of the need for hotel rooms during the summer months in the Coeur d' Alene area as many hotels run full throughout much of the summer. Here is a look at what the purposed Fairfield Inn would look like- 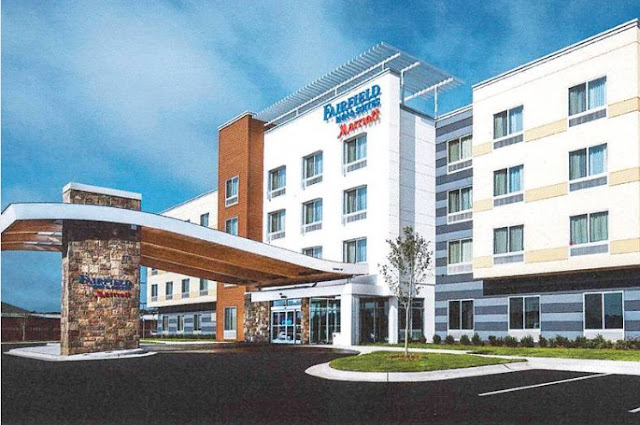 Renderings of the other buildings planned for the site are not yet available. Also noteworthy is that the InCoeurbator business incubator portion of the development will also include a makerspace similar to that of Gizmo CDA in Midtown Coeur d' Alene.

We will keep watching for more updates as we expect some development on this project soon...
Posted by Matthew Behringer at 4:15 PM