Sweeto Burrito , a South Dakota based chain of fast casual burrito restaurants is planning big things for us in the Inland Northwest. First of all the chain is launching a delivery option from it's restaurants, which will likely start sometime in April. And, in addition to the new delivery service, Sweeto Burrito is also planning to expand their presence locally, with one new location already announced and another coming soon.

Sweeto Burrito first came to our area about the middle of last year, with one single location in a multi tenant building in Spokane Valley ( 15727 E.Broadway ) . And, now they have announced plans to build a second location, this time a stand alone building near Gonzaga University and not far north of Downtown.

The new Gonzaga area Sweeto Burrito location will rise on the northwest corner of N. Ruby & Nora, close by the White Elephant store. Currently a couple small single family homes are on that corner, and will likely need to be demolished for the new restaurant. Construction will start soon on this new Sweeto Burrito, which will also feature a drive though and delivery. No opening date has been set yet, but they expect to open sometime in September and will be hiring, but there is no word about how many new jobs this new restaurant could create. 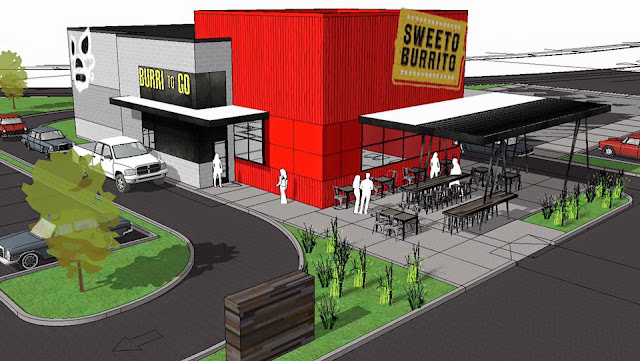 We also have early info that Sweeto Burrito is planning to open a third area location in Coeur d' Alene. The Coeur d' Alene Sweeto Burrito location has yet to be announced however, so we will re-post when we get the information on that location. There is also rumblings of future Sweeto Burrito's in other parts of Washington State, which adds up as the chain has been aggressively expanding in recent years.

Sweeto Burrito has a menu of more unique burritos made fresh in restaurant, many of the burritos are not exactly authentic Mexican burritos however with items like the Monster Cheeseburger burrito being included on the menu. Some other items are also included in their delicious offerings.

For more information on Sweeto Burrito, visit their website at-