Plans revealed for the former Macy's building in Downtown Spokane

The new owners , Centennial Properties ( who also own the neighboring River Park Square mall ) are wasting no time flipping the now closed Macy's store building at the corner of Main & Wall in Downtown Spokane. And, while demo work started a few days ago we knew very little of what they had in store for the large former department store. But, that has changed with Centennial's announcement today of the completed project renderings ,etc... . And while plans can change as time goes by ( like how the Davenport Grand first started with a plan to have a brick façade ) this glimpse is exciting, modern and could be big for Downtown. 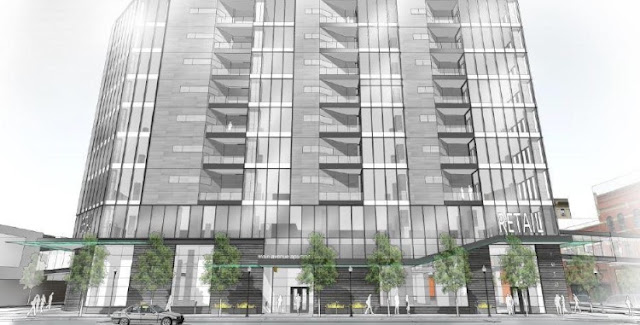 Plans call for a complete re-build to give the structure a more modern look. The mezzanine level in the former Macy's will be completely removed allowing for a first floor with high ceilings. These sections will be renovated first and will be used as retail space with no tenant or tenants yet named. However Centennial does say they are in talks to lease the space and businesses there could even open as soon as the end of next year.

The retail section of the project will be separate from River Park Square with a different name and marketing strategy. However the project will surely benefit from the area retail & restaurant businesses which even include a new Urban Outfitters store directly across Wall St from the building that is to open sometime in October .

The upper floors renovation should begin after the lower floors renovation wraps up. The 3rd & 4th floors uses are still undecided and will either be office space or apartments. The 6 floors above that will all be converted into apartments giving a new unique place to live in the city center, close to several good sized employers. There will be as many as 90 apartments in the building which will be leased and feature balcony's inset into the building. The apartments, which will be the building's last phase of construction are to be completed sometime in 2018.

So, with all these big plans, what will the building end up being called now that Macy's has moved on? Turns out Centennial Properties will be holding a contest to allow the public to name the building with entry's being accepted during the month of October. This contest will be available online on River Park Square's web site and in person at the concierge desk on the first floor of River Park Square.

Posted by Matthew Behringer at 6:16 PM