The business owners behind the new My Fresh Market grocery store are wasting no time in bringing there small urban grocery concept to life. The owners , one which is being Jim Frank who is also the developer of Kendall Yards, broke ground on the site earlier this month and plan to make the project a priority.

If all goes as planned the new My Fresh Market will open for business in April and will be located by the Eastern entry to the Kendall Yards development at the corner of Summit Pkwy & N. Monroe. Being in a urban setting the store will be small, unlike the massive supercenter type stores typical in suburban areas. Also, unlike those stores My Fresh Market will be a locally owned and operated business with just the single location. 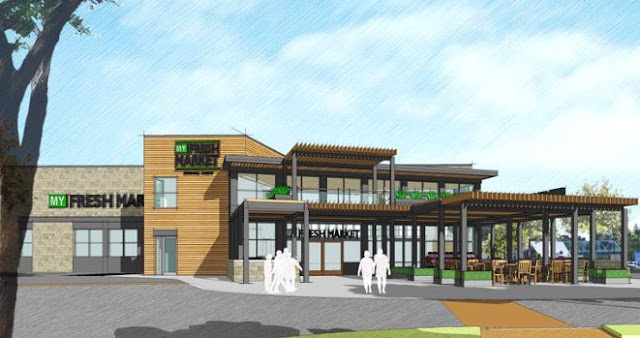 The store will have 25,000 square feet of space and 2 floors , much of product offerings will be local when available and will be an easy walk from all of Kendall Yards and some other nearby areas, including the West Central neighborhood which has limited access to fresh groceries . Among other things the store will feature-

- A good sized selection of grab-n-go foods ( pizza, sandwiches , sushi & more ) with a seating area on the front of the building.

- Growler station, which will feature both local beers and kombucha .

And, some event space. The second floor of the building will be developed as a cooking school with more information on that yet to come. The building is estimated to cost about $8 million to construct with work being done by Vandervert Construction and architectural design by Shoesmith Cox Architects PLLC of Seattle.

We'll keep watching for more info on My Fresh Market as it becomes available. A website is shown in the renderings shown above but as my writing this it only goes to a domain parked page, but we expect more info to be available at some point on-
http://www.myfreshmarketspokane.com
Posted by Matthew Behringer at 10:00 AM