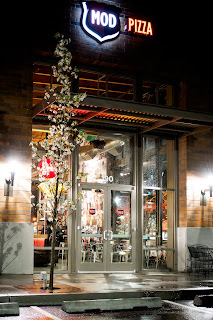 Example photo, photo is not of a Spokane area location

Mod Pizza is taking Spokane by storm! the Bellevue,WA based chain of made to order personal pizzas opened their first location in Spokane in 2015 at the South Hill's Regal Plaza development. Since then they've opened in Coeur d' Alene and even one right in the heart of Downtown Spokane.

But November 2016 has been a big month for the growing company as they have added 2 new stores in the Spokane area this month. And, although we know of no additional locations planned we can only assume there are more locations on the horizon.

Today is the opening day for the second new Mod Pizza which is now open for business in the Shadle Park Shopping Center at 2503 W. Wellesley Ave Ste. A it opened today at noon. Earlier this month the new Mod Pizza at the Hertiage North Shopping Center in North Spokane, it is one of three new tenants in the completely re-built shopping plaza at 9405 N. Newport Hwy in between The Y and the Northpointe Shopping Center.

Mod Pizza is among the fastest growing restaurant chains right now with the company itself only being founded 8 years ago in Seattle. Today the company has over 150 restaurants with locations in both the US and the UK . It's name is an acronym for " Made on Demand " which is how they make their pizza's . Mod Pizza uses a similar concept to Subway in that customer choose their pizzas and then they are ran through a 800 degree oven for about 3 minutes allowing for a fresh custom personal sized pizza.

Both new local locations will employ around 30 - 40 and are open seven days a week. For more information on Mod Pizza visit their website at-


Posted by Matthew Behringer at 4:14 PM