Where once stood the El Rancho Mobile Home Park at the corner of Highway 41 and Mullan Ave is now... nothing. While the site does have a few trees and remnants of the parks former streets are still visible, the homes that we're considered a well known eyesore are now all missing. But what, if anything , will replace the prime site on Post Falls' eastern edge? The answer is a lot!

The mobile homes we're removed slowly over the last few months by the site's new owner, Spokane developer and real estate broker , Rod Plese . Plese has already began some marketing of the property which clocks in at a little over 8 acres via his family real estate business Plese Realty. Plese plans to fully develop the site for a commercial use. The site will one day become a new shopping center with a big box retail tenant proposed .

As far as who will be tenants for the site, so far no businesses are able to be announced as coming to the shopping center site. But rumors have been heavy as to who it may be, so far the names of Safeway, Yoke's and even Winco have surfaced in the rumor mill but nothing coming from anyone in the authority to announce a tenant.

The site will also contain smaller businesses in addition to the big box grocery or other store. A gas station, bank or resturants are also possible. There is no set timeline for construction as of yet but work should begin in the near future. Keep with Inland Northwest Business Watch for more as this project develops. 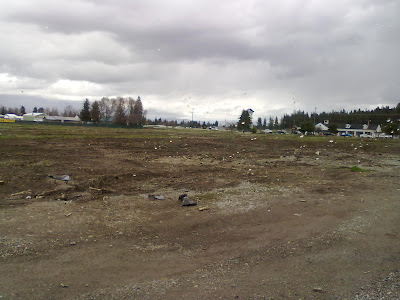 
Posted by Matthew Behringer at 11:00 AM