It was mentioned earlier on this blog that current construction hole at the corner of Third and Division will soon be filled by a new building. After, a hotel project there failed a couple of years ago the site has sat empty and bit of an eyesore to those coming into Downtown.

But, now that site won't be vacant anymore. Although it is still creating a bit of controversy due to the small strip mall style design more typical of suburban area and not ideal for a Downtown area where pedestrian friendliness is key.

We, had only been speculating on designs for this new building until late last week when I stumbled upon these renderings of the purposed building. The building is actually a mixed use development, in that it will have two stories. The first will be restaurant / retail and the second floor will be office space. 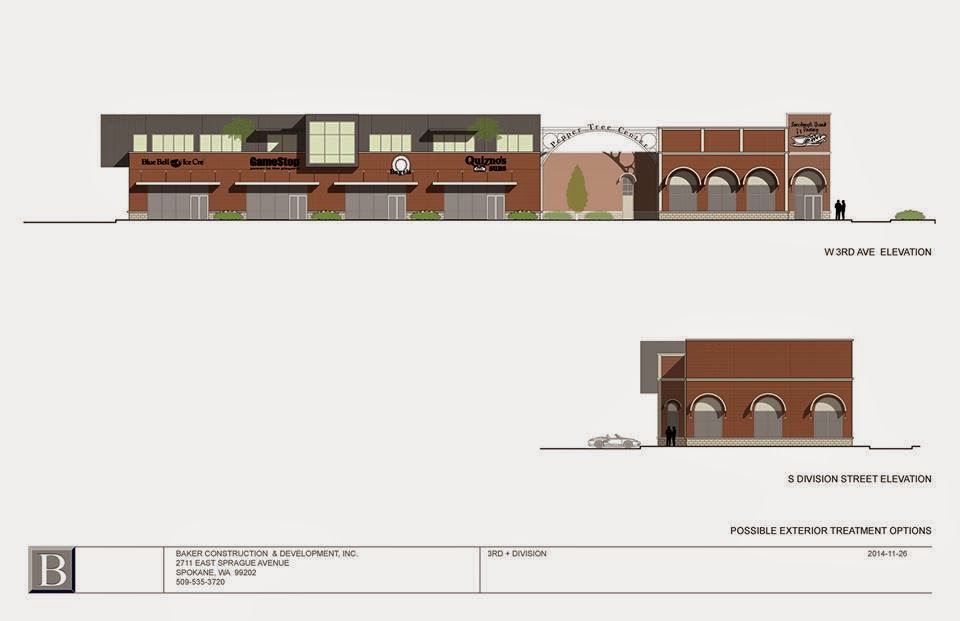 In the renderings, the apparent building name , Pepper Tree Center is visible. This name is likely due to the building owner being the same people behind the Best Western Peppertree Inn hotels. In fact, the management offices for Peppertree Inn's will occupy one of the office suites on the second floor.

Also, in the renderings are business names. These are likely only placed there for marketing purposes but still gives us an idea of what we may one day see at the new building.

No tenants have been confirmed for the Pepper Tree Center, however the space is geared towards having at least one restaurant tenant.

Leasing for the Pepper Tree Center is being done by Kiemle & Hagood Company. Information of space at the building can be found at-