After several months of construction work the project to " finish " the Convention Center is nearing it's end and we're now only days a way from the official opening.

An opening open house and dedication ceremony has been scheduled at the Convention Center. This event will take place Feb. 24th from 2 - 4 pm. The ceremony will take place at the center's east entrance. Here are the details... 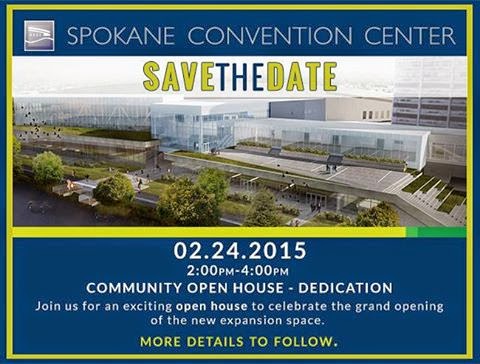 ﻿
As is implied in the promo ad, some more details on this open house is still coming. For more as it is announced follow the Spokane Convention Center via the links at the bottom of this article.
As a reminder here is what was all included in this long time coming expansion-
﻿
- Adds 90,000 square feet of new space to the building
- Adds around 20,000 square feet onto the main exhibit hall space
- Creates new meeting spaces
- Makes Spokane more marketable to conventions and shows. This means Spokane will be on caliber with other major Northwest cities like Seattle and Portland.
-Exhibit hall space will now be over 100,000 square feet
- Newly redesigned Centennial Trail running behind the convention center. This is one of the busiest sections of the entire Centennial Trail system.
- Increases access and beauty of the Spokane River as it flows by the Convention Center
For more information on the Spokane Convention Center check them out at -
www.spokanecenter.com
Or, find them on Facebook at-
https://www.facebook.com/spokanecenter
Posted by Matthew Behringer at 10:00 AM