The skyline of the area immediately to the east of Downtown Spokane will soon be changing. This is because two non profits are planning to construct new apartment buildings along E. 2nd, a few blocks east of Division.

Catholic Charities is following on the success of it's Father Bach Haven apartment building in Downtown with plans for Father Bach II . This new building, just like the original will provide apartments to the " chronically homeless " . The original Father Bach complex was opened 2013 and is located at 108 E. State St.

This new apartment complex will look similar but will be a few blocks away. Father Bach II will be at 201 E. Second. The new complex will have four stories and 51 apartments, it was designed by Nystrom + Olson Architecture of Spokane. 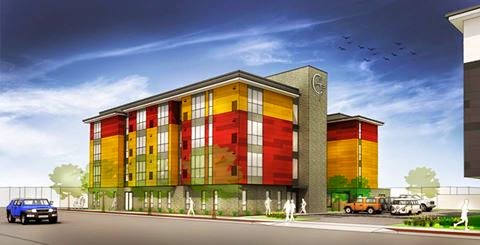 In addition to the new Catholic Charities development, Volunteers of America is also in the development stages to building a new apartment building nearby.

Both are to be built in the coming weeks / months and both will be close to each other. The VOA building will rise up at 217 E. Second.

It will also feature four stories and 51 apartment units, all of which are considered " transitional housing " . Here is a look at what the new Volunteers of America apartment building will look like- 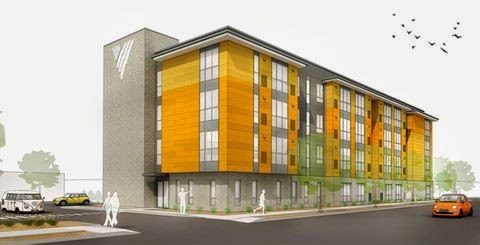 Posted by Matthew Behringer at 10:42 AM