The Spokane based chain restaurant , Twigs Bistro & Martini Bar is planning a major remodel and expansion of their flagship location inside River Park Square. And, this expansion will not only upgrade the restaurant, but Downtown mall as a whole with a cool landing feature over top of the mall's main entry.

Twigs Bistro & Martini Bar which has been a part of Downtown Spokane since 2001 will expand the restaurant to a total of 8,000 square feet. This expansion will allow for a larger bar area and more general dining areas. Of those, 8,000 square feet about 1,400 square feet will be on a new space to be called " The Landing ".

The Landing will go out from the restaurant's third floor storefront and be suspended over top of the mall's main entry area three floors below. Here is a look at the plans- 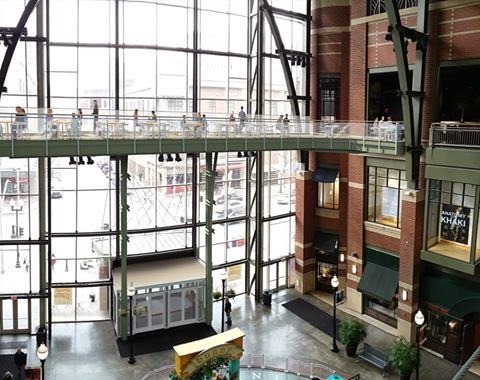 The Landing dining space will also be up against the mall's large front windows, giving Twigs a great view of Downtown. Construction on the new restaurant expansion will occur sometime during the Summer and take about 2 to 3 months.

Construction work will be done by Vandervert Construction and design work by ALSC Architects , both are local company's.

Additionally positive about this new project is the creation jobs. Twigs will nearly double their staff at River Park Square, going to about 65 employees.

For more information on Twigs Bistro & Martini Bar, including a look at their menu visit their web site at-

Twigs Bistro & Martini Bar operates 9 locations, including locations in Washington , Idaho, Oregon and Utah. The chain is known for it's 36 martini drink menu and excellent lunch and dinner menu.
Posted by Matthew Behringer at 5:58 PM