Two new construction project are beginning soon in Downtown Spokane. Join the several other projects already underway in the always improving Downtown core. Both of these projects will have ground breakings / open house to introduce their plans soon, here is what's happening when and where...

Mobius was forced out of their original home in the 809 W. Main building across from River Park Square. Mobius had to leave to make way for a new Anthropologie store that is to open there in the fall of this year. Also, we've heard a hair salon may also open in that same building.

Today, Mobius Science Center is still in business, just in temporary space on the third floor of the Downtown branch of the Spokane Public Library. Mobius' sister museum, Mobius Children's Museum is un affected by all this and remains open in the basement of River Park Square mall.

Mobius Science Center will move soon to their new permanent home , and a cool new home at that, the historic former Post Street Substation building along the Spokane River just north of the Spokane City Hall. Their pre-construction sneak peak will be held at this site, here are the details on that...

This event will give the public a chance to look at renderings of the new science center and ask questions about the plans. Sam Nystrom of Nystrom + Olson Architects will speak and refreshments will be served.

In case you missed my prior post, the large hole at the corner of N. Division and Third will soon actually built on. The hole was dug for a hotel project that stalled during the Great Recession but now the same developer is starting a new project there. 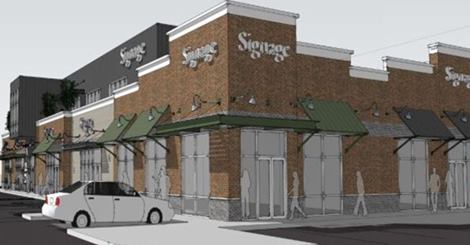 This new building will more technically be located at 2 W. Third Ave and will be a multi-tenant shopping center style building with surface parking lot. No tenants have been announced there as of now but some restaurants will likely be included. The second floor will be used for office space, of which some space has already been leased for a HQ for the developers several Best Western branded hotels.

Construction will start soon, likely after a ground breaking which will be held in a couple of weeks. Here is the information of ground breaking planned for the Peppertree project-

Bagels and coffee will be provided by Einstein Bros. Bagels
Posted by Matthew Behringer at 9:00 AM