Not to brag or anything but, in a way I called it, when I posted on this site earlier this year that 2015 would be a year of change for Downtown Spokane's River Park Square Mall. While many stores will stay where they are today, some others will be in the process of converting to something new in the coming months. Here is what to expect for the Cowles Co. owned Downtown mall...

Over the last few months we've seen a couple of business changes that are already complete. Arbor Crest Winery closed their third floor tasting room, but next door Hole Shot Pizza opened up taking over the former Pizza Oven space.

Also, Whiz Kids relocated too a new bigger storefront on the third floor of the mall by the Nordstrom's entrance, they had been on the second floor.

The skywalk between River Park Square and the neighboring Macy's store ( across Wall St. ) is to have already closed until the holiday shopping season. This is to allow demolition of the small building there ( called the Saad Building, housed T-Mobile,etc. at one time ) and rebuilding of a new more modern looking building for Urban Outfitters.

Urban Outfitters is planning to open there new store at River Park Square in early 2016, here is some more information about that new store-

And, a look at what the newly completed store will look like after all the construction wraps up- 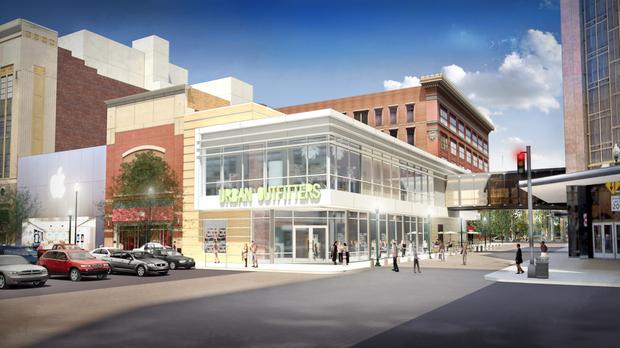 Note: Macy's is still open during the construction as this only affects the skywalk. Macy's can be entered at any of their street level entrances including on Main.

A sister store, but different from to aforementioned Urban Outfitters, Anthropologie , is coming to the "West 809" building across the street from River Park Square, but still owned by the Mall. Construction is already underway on this new store and it is currently scheduled to open for business this fall.

Anthropologie will take the space that was last the Mobius Science Center who is also on the move, moving to newly renovated space in the Avista Post Steet Annex Building not far north of River Park Square.

Some additional retail space in the West 809 Building, right next door to the new Anthropolgie store, has also been leased and a new store is on it's way there too.

The business will be a new clothing store concept from the same people who own the locally owned and operated Fringe Boutique. We have inquired about this new store, but they are not ready to make an official comment for opening date,etc...

During the remodel Twigs will be closed, and take over a the former Gamestop store space, which also closed their store in the Downtown mall earlier this year. Twigs will re-open sometime in the fall, here is the information about that project-

And, a look at what the new Twigs will look like later this year- 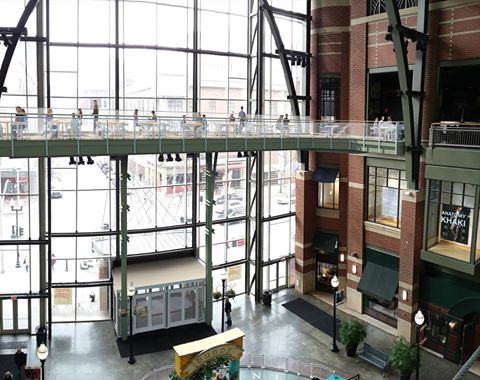 During construction of " Twigs Landing " occasional barricaded closures will have to happen below at the mall entry.

The AMC Movie Theater on floors 4 and 5 of River Park Square will be involved in all the new changes. This as AMC is planning a floor by floor remodel of their space, beginning next month and wrapping up in December.

Movie goers need not worry however as AMC will keep most theaters and the popular IMAX theater open during the project.

A new restaurant / bar on the third floor...

A new bar and dining concept is coming to third floor space next to the AMC box office on the mall's third floor. The mall mentions this, but liquor licenses only show a name of Gamlamp, we're not sure yet if this will be the name of the new space or not, and exactly what Gaslamp may be.

To make way for the new Urban Outfitters store / building, the long running, Leland's Barbershop has had to vacate their small storefront facing Wall St in the Saad Building.

But Leland's isn't going anywhere, as the barbershop has already re-opened in a temporary location inside the former Chatters Salon space on the first floor of the mall.

But this location is only temporary as construction workers are hard at work up on the second floor for a new permanent location for the barbershop in the space across from Auntie Anne's Pretzels.

For more information about this project, check this link-

Could more new stores and / or restaurants come to River Park Square?

The answer is a big yes, while the Mall is clearly going strong as one of the busier mall's in the Inland Northwest, they do still have several spaces available for lease. This includes, the prime former Chatters Salon space that I mentioned just moments ago and others.

Plus, it would be great to see some more locally owned and operated businesses in the mall. Sure, the chains bring jobs,etc... but shopping local is the way to go, just sayin'.

For more information about River Park Square, including leasing space at the busy Downtown mall, visit-

Posted by Matthew Behringer at 1:28 PM