Garageland is coming soon to Downtown Spokane, remodeling a vacant former nightclub and restaurant and kind of cooling up the eastern edge of Downtown just a bit more. 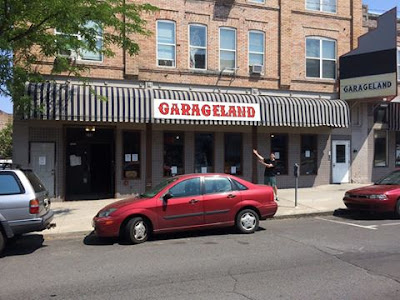 Garageland will primarily be a record shop, being the second new record store to open in Spokane recently with Groove Merchants now open up in the Garland District. The new Garageland store will carry both new and used vinyl from a verity of artists / genres.

But, records aren't the only thing this new business will have. Garageland is also planning to have a small bar / kitchen for food, beer and wine. The kitchen/bar will also eventually double as an live music venue on occasion. Vintage goods will also be sold in the store portion, but it's untold exactly how much.

On top of providing Downtown with a exciting new retail store, Garageland is also renovating part of building that's been vacant for a while and hopped around between tenants for a time before that. Garageland will occupy the ground floor of 230 W. Riverside, seen above with a CBGB style logo sign.

Garageland will occupy about 3,300 square feet of the building which was leased to the new business by Dallas Lightner of Black Commercial. The other side of the building, which is also empty although it has a large "Paradise Restaurant" sign still on it remains available for lease.

Garageland is in the process of their remodel now and they hope to be open for business later this Summer. For more information about Garageland visit their Facebook page at-

Posted by Matthew Behringer at 8:06 AM