I've received several emails about the construction work that has started on the former Shakey's Pizza location at 9602 N. Newport Hwy ( out front of the Northpointe Shopping Center ) . And now here is your answer to this exciting project that will modernize the building and split it into space for two up and coming local restaurants. 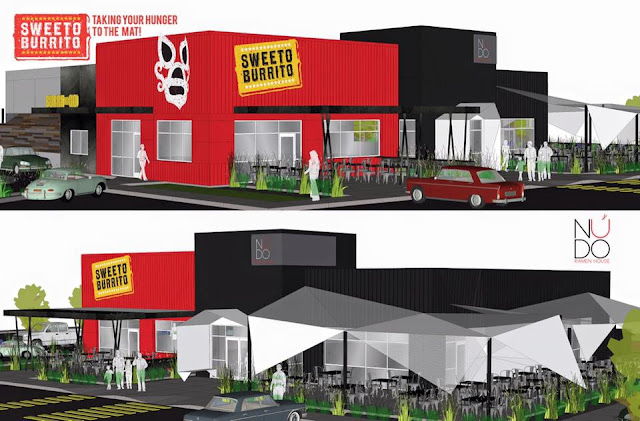 -The northern side of the building will be a new location of the rapidly expanding Sweeto Burrito chain of unconventional burrito restaurants. Sweeto Burrito is shooting for an early August opening for their new location that will feature both dine in and a drive through. The new Sweeto Burrito at Northpointe will be about 2700 square feet and employ about 30.

This marks the beginning of Sweeto Burrito's expansion further into the Spokane market. Sweeto opened their first restaurant here last year at 15705 E. Broadway near Wal Mart in Spokane Valley. The company plans to add several more stores in the area and even recently started work on a location at 1814 N. Division , in the University District just north of the White Elephant. That location should open in September. Sweeto Burrito is also in the planning stages for new locations in Coeur d' Alene and the Tri-Cities. The Coeur d' Alene Sweeto Burrito is their next priority with an announcement on that coming soon.

- The southern half of the former Shakey's Pizza Parlor building will be converted into a new location for the locally owned & operated NUDO Ramen House who is well known from their location Downtown near the Davenport Hotel at 818 W. Sprague Ave. . The new NUDO at the Northpointe Shopping Center is also shooting for an opening in August ( late August however ) and will occupy about 2800 square feet.

The new NUDO will offer both indoor dining and a good sized outdoor patio for additional dining space during the warmer months. And, of course they'll bring their delicious menu of ramen dishes including the only place ( that I know of... ) in Spokane to get a ramen burger!

For more information on NUDO visit their website at - http://www.nudoramen.com

And, for more information on Sweeto Burrito visit -


Posted by Matthew Behringer at 3:10 PM